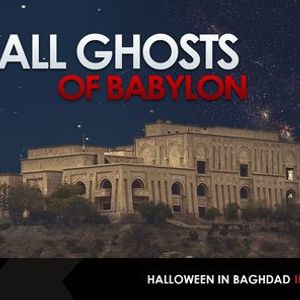 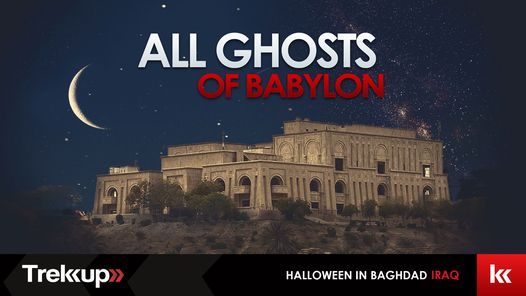 The spooky and surreal await you this all-Hallows’ Eve at the dark and eerie palace of Saddam Hussein! After a phantom search among the ziggurats of Nasiriya, we will explore the ghostly ruins of Babylon, and indulge in Arabian Nights tales as we wander the markets and visit the monuments of Baghdad…before heading straight for Saddam’s former crib!

Known for constructing dozens of palaces across Iraq and hiding his whereabouts among them, Saddam had a taste for the gilded and extravagant, carrying on the legacy of the ancient kings Babylon. What remains of these palatial monuments is crumbling marble, broken windows, and the hollowed-out dreams of an autocrat. And on Halloween night we will camp out on his floor, telling ghost stories, and tempting the spirits to pay us a visit…if you dare!

Our exploration of Mesopotamia, the cradle of civilization, will reach the ghostly ruins of Ancient Babylon. Dating from the 18th to 6th century BC, Babylon was rumored to have Hanging Gardens attached to the Palace of King Nebuchadnezzar, and are considered one of the Seven Wonders of the Hellenic World.

A city of uber rich history, Baghdad is a melting pot of races and religions that date back centuries, and is often referred to as the Cradle Civilization, New Babylon or even the Gate of Gods. We will explore the statues of “One Thousand and One Nights” along the Tigris River and visit the Church of the Virgin Mary, ending up all the way in the busy streets of a bustling modern metropolis.

Our journey continues to the Biblical hometown of Abraham, known as Ur, dating back to 2,000 B.C. Once the centre of the wealthy Summerian empire, which drew traders as far as the Mediterranean Sea, Ur is home to one of three remaining ziggurats in the world. This temple complex was begun as a shrine to the moon god Nanna, the patron deity of Ur, and completed by King Shulgi who promptly declared himself a god.

One of the most interesting Middle Eastern wonders are the Iraqi wetlands. We will discover a little-known tribe, living among the marshes of Tigris and Euphrates delta. The area has just recently opened for visitors and immediately became yet another UNESCO World Heritage Site in Iraq. We will hear the story of Marsh Arabs, sleep in a “Mutheef” Old House and soak in a gorgeous sunrise while navigating a “Shakhtor” – narrow canoe used by locals.

This long Halloween weekend is sure to conjure up many thrilling stories…and we dare you to join us!

After landing and clearing immigration, we will drive to marshes to camp overnight in the floating "Mutheef" - old houses built from reeds.

DAY 2 / OCT 30 // SATURDAY MARSHES
Today we wake up early to watch the sunrise while riding the "shakhtor" – an old narrow boat used in the marshes – and spot local wildlife.

We then drive back to Baghdad via the ancient city of Ur to explore its famous Ziggurat, before continuing to Nasriya and Baghdad.

DAY 3 / OCT 31 // SUNDAY Ancient Babylon & Halloween at Saddam’s palace.
Today we visit the ruins of Babylon with a stop for quick provisions, before heading to Saddam’s palace to set up camp.

And we will spend Halloween Night in Saddam’s bedroom!

Day 4 / NOV 01 // MONDAY BAGHDAD
After surviving the night – if we do – we will head to Baghdad to freshen up before a city tour of local mosques and monuments. In the evening we catch our flight back home.

Grade: Easy, available to everyone.

Visa: Western and Gulf passports get visa on arrival.

You may also like the following events from Trekkup Dubai:

Tickets for All Ghosts of Babylon | Halloween at Saddams', Iraq can be booked here.