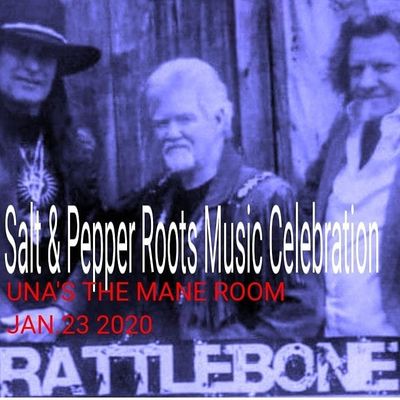 Rattlebone is Chris Anderson,Lead Guitarist, Vocalist and Songwriter, well-known as heavy weight, world class guitarist, formerly with The Outlaws and well-known for his collaborations with artists that include Dickey Betts, Lucinda Williams, Hank Williams Jr., and Skynyrd.

Dennis Gulley, Bassist, vocalist and songwriter is a phenomenally gifted bass player who has performed with Alabama, Doctor Hook, Jeff Cook, The AGB and Jackson Highway, but he is also an amazing vocalist who is known for singing the hit song “Old Time Rock And Roll" demo that was pitched to Bob Seger.

Daryl Burgess, Drummer, vocalist and songwriter is a JUNO award winning Canadian drummer who toured with Mark Selby, The Cosmic Lounge Orchestra and others, but he is best known for his incredible songwriting ability with Collin James, Alanis Morissette, Tim McGraw, Faith Hill, Joe Dee Messina, Reba McEntire and more.

Also performing will be The Reverand Jerry Reeves Quartet bringing his spirit filled soul/ gospel sound to the stage.

What one heck of an evening to kick off the Salt & Pepper Roots Music Celebration for 2020. The event will be recorded by RADIOVIZIONS  for distribution to public radio.

The series is produced by Russell Gulley in partnership with UNA's Department of Entertainment Industries, The Alabama  Folklife Association, and The Music Preservation Society/ W.C.Handy Festival,  with support of The Alabama State Council on the Arts, The National Endowment for the Arts, Counts Brothers Music, Nuway Vinyl,  Swampers Lounge at the Marriott  Shoals, Champy's Chicken, Smith Ironworks, WZZA Radio, and Robert Ray/Attorney at Law and other area supporters.

Tickets from USD 5 to 30 on eventbrite.com