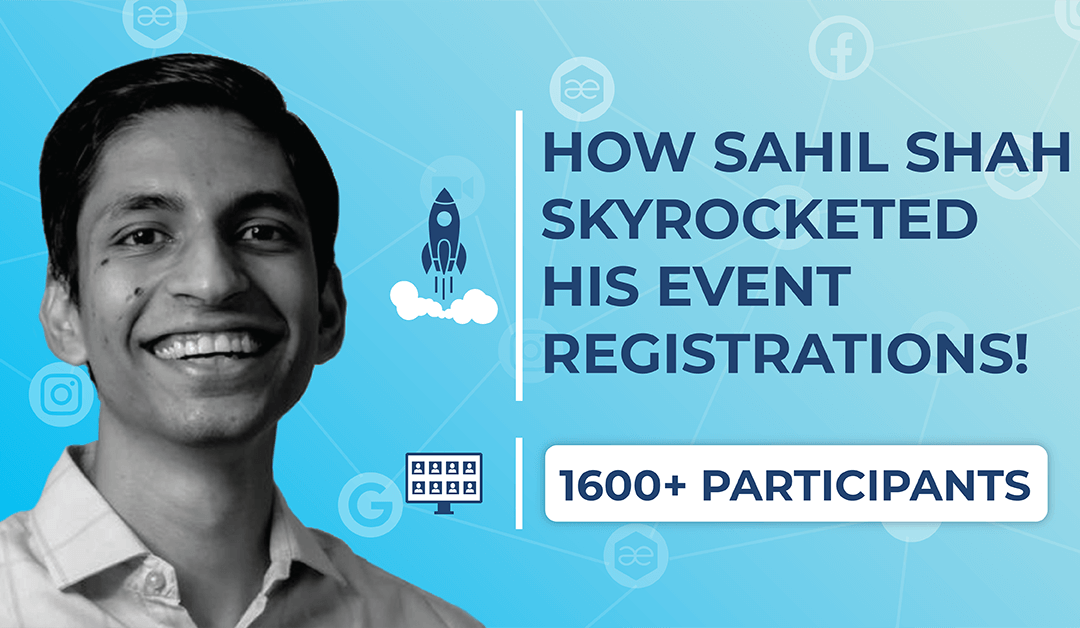 Sahil Shah is a young entrepreneur, social media strategist, and TEDx speaker. He is a founder of Netsavvies media company and Hungrito food discovery platform. He has always been a great leader and speaker. Social media marketing is his thing but organizing a workshop was quite a new thing for him to try.

Sahil Shah had obstacles in his goal but he overcome it with flying colors. Check how he managed to bring results.

Obstacles in the objective-

For Sahil Shah, organizing workshops was a new area and task; he was a bit skeptical about the event.

Now the questions were,

Well, aren’t these questions very natural? We all have doubts about events being successful and achieving desired goals.

What was the solution, then?

Sahil Shah wanted to move forward with the idea of creating workshops. He moved with the teaching goal of making people learn about digital marketing via workshops. For a new idea, he had his doubts. He was using AllEvents for the purpose of ticket selling.

As Sahil Shah was working individually on his workshop idea, he scheduled a call with us and shared his concerns with us. On a call, we discussed his concerns and how we can help him with our event promotion service.

The end goal was to increase ticket sales and generate revenue.

Sahil Shah published his five days Social Media Marketing Fundamentals Workshop. After a couple of days, we started with the promotion campaigns.

We started promoting Sahil’s workshops on all the social media platforms via image ads. We focused on the channels and platforms which were giving more results.

After analyzing paid ad performance, we tried video format for ads for better results. Well, the idea went according to plan and the video ad got us more clicks with better ROI.

Throughout the campaign duration, we closely monitored & optimized all the factors such as targeting audience, creatives, ads format. We keep providing our insights and ideas to event organizers for better results.

We kept on optimizing our marketing strategies and efforts. We started with one workshop and kicked it off with five more.

We met their expectations in terms of ROI and outpassed what was expected.

Getting awareness among more than 300K+ audience was game-changing for their newly started workshop experiment.

AllEvents promotional strategy played a vital role in the success of the event. Event Marketing experiment with AllEvents has outperformed for Sahil Shah.

Are you hosting events and want to increase the ROI of promotion efforts?

Helping event organizers in getting best results with AllEvents.in