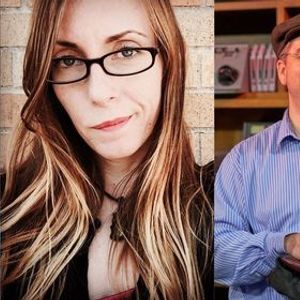 Fire in the Glen, an energetic trio based in York, Berks and Lancaster counties, doesn't hold back at its performances! That means audiences can expect a lively presentation of blistering fiddle tunes, mug-thumping pub songs and a few soulful ballads and airs. The band, featuring Tom Knapp on fiddle, bodhran, backing vocals, Amanda Wells on lead vocals, guitar and percussion, and Rod Nevin on lead vocals, Highland bagpipes, Scottish smallpipes, pennywhistles and ukulele, is expanding to new horizons.

These dedicated musicians are making a bold effort to bring Irish, Scottish and Maritimes music, as well as their own brand of "Celtic eclectic" accents, to southcentral Pennsylvania and beyond. And that means audiences can't seem to help clapping and singing along!

Fire in the Glen came together as a duo in 1999. It was a stroke of fortune (OK, an accident -- ask Tom to tell you about it sometime) that brought Tom and his first musical partner, singer/guitarist John Varner, together for a string of shows in various Lancaster County pubs. After two years, the band changed -- the first of many alterations over the years. Since the beginning, Tom has remained a constant in the band, providing an aggressive style of Irish fiddling along with a steady bodhran rhythm, questionable jokes, backing vocals and bits of shouting. Bandmates over the years have included John Varner, Chet Williamson, Jason Mundok, Aaron Gagne, Michael Filippo, Durelle Leaman, David Pedrick, Melissa Brun, Mick Mullen and Megan Mullen.

Since the band's professional debut in March 1999, the group has opened for the likes of Lunasa, Great Big Sea, Enter the Haggis, Fil Campbell, Aoife Clancy, the Young Dubliners, Barleyjuice, Tarras, Charlie Zahm, the Dublin 5 and Kieran O'Hare. They performed at the Festival Club at Cape Breton's highly esteemed Celtic Colours International Festival, the Celtic Fling in Mount Hope, Pennsylvania, and at countless pubs, festivals, wedding receptions, retirement homes and other venues and social occasions.

The band's first CD, On the Road to Lisdoonvarna, is sold out after receiving lots of positive feedback for its lively appeal. Also gone is the band's EP, Aaargh! The Susquehanna Pirates!, which featured some of the band's original work, and Pirates, Wakes & Whiskey, the band's second full-length CD that boasted 70 minutes of music, including several tracks recorded live at Bube's Brewery in Mount Joy, Pennsylvania. Still available are Let the Wind Blow High, which was released in March 2005, Shout 'til the Break of Day, released in 2010, Rattlin' O'er the Bogs from 2017 and their most recent CD, Nollaig Shona Dhaoibh, a Celtic Christmas CD from 2019.

If you're interested in a band that blends traditional Irish, Scottish and Cape Breton styles with its own "Celtic eclectic" approach, check out Fire in the Glen. You can reach the band by calling Tom at 717-396-9293 or by emailing him at dG9tIHwgZmlyZWludGhlZ2xlbiAhIGNvbQ==. Visit their website at http://fireintheglen.com.

You may also like the following events from The King George Speakeasy: