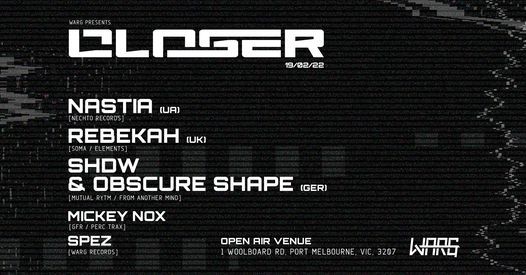 Bringing you CLOSER to Techno.

Raw, odd and heavy techno music are the fundamentals of Warg and with many of our talented friends pushing the relentless sound we love overseas, we thought it was time to bring you CLOSER to the music we truly love.

Tickets on sale Thursday the 8th of July at 4:30PM AEST.

Undoubtedly one of the most revered names in techno, Rebekah boasts a string of notable releases on the likes of Mord, Soma, CLR and Elements, and has been highly regarded by the likes of Chris Liebing, Bas Mooy, Paula Temple, Perc and many more throughout the course of her career. She’s earned her respected reputation over recent years, with her relentlessly heavy sound winning her titles such as DJ Mag’s Best Producer in 2018, and featuring as their January cover star in 2019. She launched her highly successful live set in late 2018 which was named by Resident Advisor as one of the best performances of ADE 2018.

For this duo when it comes to where to do a show, there is not much point to debate over in which room of the party they belong - in techno terms there are the two places; the ones you tend to call either the “big room” or the “main stage”.

Marco Bläsi and Luigi Urban together make up the DJ and production team SHDW & Obscure Shape. These two relatively young newcomers have in very short time managed to build up a large and loyal following that continuously keeps growing with each year since their start in 2014. Hailing from Stuttgart, Germany they together run the label From Another Mind that came into existence in 2015 from the party they started one year earlier. Marco (aka SHDW) and Luigi (aka Obscure Shape) decided upon the From Another Mind name when they realised they had a different idea of how they wanted to program a party, and then later on the label. From Another Mind holds four releases from the boys to date. One of the standout releases from the FAM catalogue is the EP titled “Die Wei e Rose”, the four tracker “12” was especially well received by critics and audience alike, catapulting Marco and Luigi to the next level of their career. Also worth to mention are the two extensive remix packages based on previous FAM releases that include reworks from for example Rødhåd, Tale of Us, Dax J and James Ruskin. “We have the same vision of techno. We are two people but sometimes we act as one”, says Luigi. Marco continues: “It’s like a symbiosis”.

We have arranged to bring in the legendary Funktion One Vero sound system supplied by our friends at Full Throttle Entertainment. The same team behind Rainbow Serpent Market Stage and other well renowned events and festivals.

Due to current check in and contact tracing requirements it is essential that the correct details are provided when purchasing tickets. Please insure the full name, contact number and email are provided for each attendee.

The safety of our customers and staff is of paramount importance at all Warg events. To improve safety and comply with the current COVID-19 restrictions, we have limited the capacity of this event. Further tickets may be released in line with the future easing of restrictions outlined by the Victorian government.

Should the event be unable to proceed on the original date, it will be postponed to a later date. Refunds will be available for those who are unable to attend the new date.

Tickets for Warg presents CLOSER can be booked here.