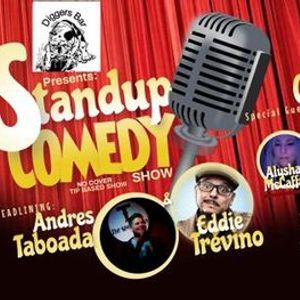 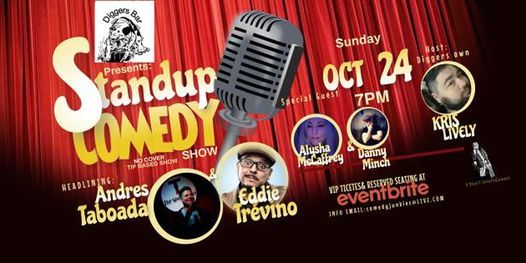 Comedy Series at Diggers Continues Bring Big Tip Money
About this event
TIP Based Show, No Cover But Bring those bills.

Andrés Taboada was born in Peru, but when he turned 16, his parents sent him off to boarding school in Germany, where he learned he wasn’t white. After going to college in California and working as a teacher in Southeast Asia, he eventually came back to the States, and Miami is where he performed stand up for the very first time. Andrés now lives in Los Angeles, where he recently won the Funny and Foreign-Born Showcase at the Glendale Comedy Festival. He also won the award for Best Comedic Actor at Miami WebFest for Miami Mic Boys, which he wrote, directed, and starred in. He's had too many twisted lives in a few different continents and is more than happy to make you laugh about it.

Eddie Trevino Winner of the young comics at The Icehouse

Kris Lively our host for the night

Danny Minch Fan Page (The Blue Comedian)
Follow Contact
About The Host: Blue Comedy and Word play for all..
Website Link: http://www.dannyminchcomedy.com
Are you the host?
Nearby Hotels 244 South Main Street,,Willits,95490,US, United States
Report a problem ?