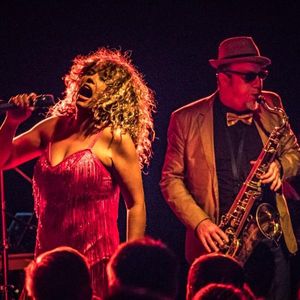 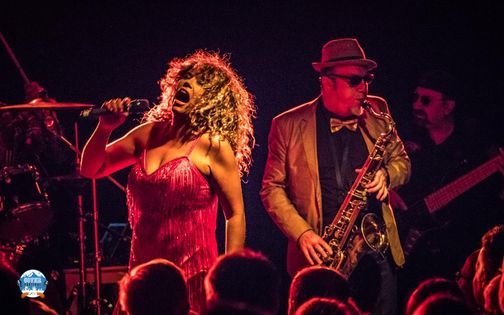 Come shake a tail feather with the UK's original, award-winning tribute to the legendary Queen of Rock n Roll, aka Justine Riddoch and her talented cast as 'Totally Tina!'

When Tina Turner burst onto the scene, she won the hearts of music fans from the outset, creating a fearsome reputation for her live performances – and those never-ending legs!

Early hits River Deep – Mountain High, Proud Mary and Nutbush City Limits were just a taste of what was to come. We Don’t Need Another Hero, Simply the Best, What’s Love Got to Do With It, I Don’t Wanna Lose You and When the Heartache is Over propelled her to stadium concert stardom.

Supported by her super-talented band and dazzling dancing girls in sequins, feathers and diamonds, Justine is the SUPREME Tina (a National Tribute Awards winner since 2013). She’s got the looks, she’s got the moves, she's got the legs, but most of all, she’s got THE voice. Join an army of loyal fans for a truly authentic, fun-packed musical spectacular!

The band plays to audiences all over the country and in Europe, and has performed at the Cover Festival in Davos, Switzerland (Tina Turner’s new home country) for the last 2 years.

"Close your eyes and Tina was there, open them and she was still there! Justine and her dancers and band are outstanding...
Totally TINA! is Totally Terrific. A fitting tribute in every way with pure passion pulsing through the whole performance" _ _ _ _ _
NORTH WEST END

“This really is a fantastic evening and you’d swear that you were watching the real Tina in action.”
UK THEATRE NETWORK

You may also like the following events from Totally Tina:

Tickets for Totally TINA! at The Edge, Wigan can be booked here.

Totally Tina
Follow Contact
About The Host: The UK's Offical No 1 tribute to Tina Turner. Winner of the National Tribute Music Awards 2016, 2017 & 2018.
Website Link: http://www.totallytina.co.uk/
Are you the host?
Nearby Hotels The Edge, Wigan, United Kingdom
Report a problem ?