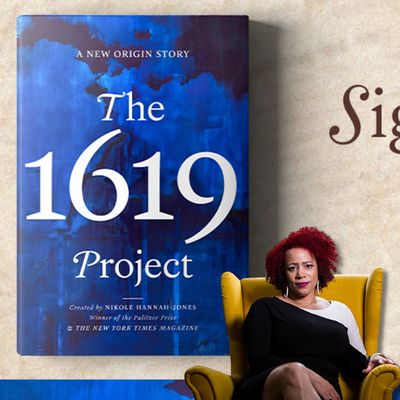 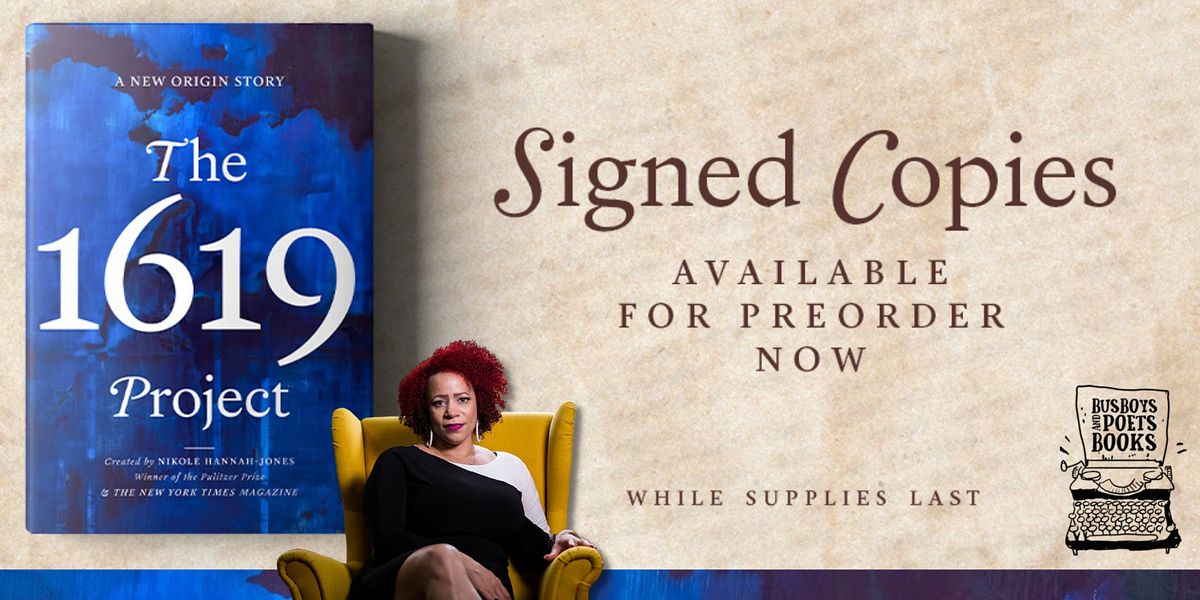 Busboys and Poets Books is honored to present the opportunity to purchase a signed copy of THE 1619 PROJECT: A NEW ORIGIN STORY ($38.00) by Nikkole Hannah-Jones for pick up or shipping. The book is slated to be released on November 16th, 2021 and we will have courtesy pick up available at all of our locations as well as shipping to anywhere in the United States for an additional fee. Copies are limited, so please purchase sooner than later to guarantee your signed copy. We will have unsigned copies available at all Busboys and Poets Books the week of the release.

Pre-ordered books will be available for pick up starting at 12 PM from all of our locations on November 16th, and folks who choose shipping should expect the book to be shipped out November 15th with 2 Day Priority Mailing through the United States Postal Service (USPS). Books should be expected by the end of week, no later than November 19th.

TO GUARANTEE YOUR SIGNED COPY OF THE 1619 PROJECT YOU MUST PRE-PURCHASE ON THIS EVENTBRITE PAGE, WITH EACH TICKET REPRESENTING A SINGLE SIGNED COPY (LIMIT FOUR [4] PER PERSON).

In late August 1619, a ship arrived in the British colony of Virginia bearing a cargo of twenty to thirty enslaved people from Africa. Their arrival led to the barbaric and unprecedented system of American chattel slavery that would last for the next 250 years. This is sometimes referred to as the country's original sin, but it is more than that: It is the source of so much that still defines the United States.

The New York Times Magazine's award-winning "1619 Project" issue reframed our understanding of American history by placing slavery and its continuing legacy at the center of our national narrative. This new book substantially expands on that work, weaving together eighteen essays that explore the legacy of slavery in present-day America with thirty-six poems and works of fiction that illuminate key moments of oppression, struggle, and resistance. The essays show how the inheritance of 1619 reaches into every part of contemporary American society, from politics, music, diet, traffic, and citizenship to capitalism, religion, and our democracy itself.

This is a book that speaks directly to our current moment, contextualizing the systems of race and caste within which we operate today. It reveals long-glossed-over truths around our nation's founding and construction--and the way that the legacy of slavery did not end with emancipation, but continues to shape contemporary American life.

Tickets for Busboys and Poets Books Presents THE 1619 PROJECT Signed Pre-Order Sale can be booked here.

Busboys and Poets
Follow Contact
About The Host: More than just a restaurant.
Website Link: http://www.busboysandpoets.com
Are you the host?
Nearby Hotels Busboys and Poets, 2021 14th Street Northwest, Washington, United States
Event details from Eventbrite Report a problem ?