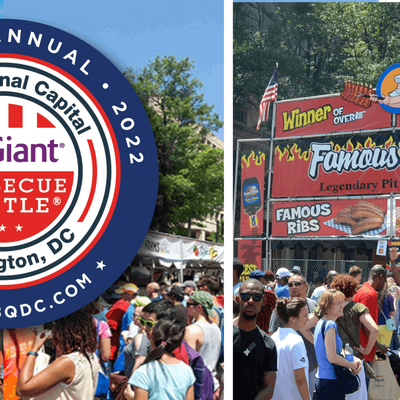 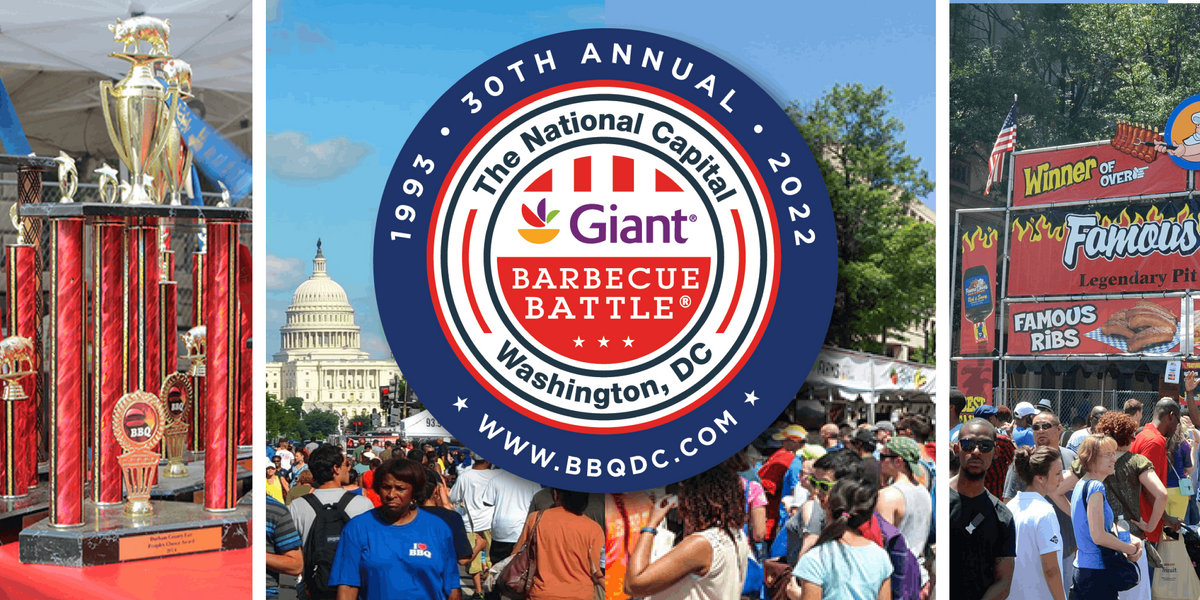 One of the Country's Largest Annual Food and Music Festivals and the Only BBQ Event proclaimed "America's national BBQ Championship" on the floor of Congress, the Giant National Capital Barbecue Battle officially kicks off the 2022 Summer Season on June 25th and 26th, 2022.   For Three Decades, The Barbecue Battle has been cooking up lots of great food, music & fun on America’s Main Street, Pennsylvania Avenue. This tasty event offers Washington D.C. area residents and visitors alike, a two-day line-up of everything from tempting BBQ & Grilled food samples to cooking demonstrations, interactive exhibits and non-stop live entertainment on three music stages.

“One of the Nation’s Best Food Festivals.” —The Huffington Post

Now celebrating its 30th year, The Giant National Capital Barbecue Battle has become one of the largest and most unique food & music festivals in the country. Celebrating the art of cooking and the joy of eating, the Barbecue Battle offers residents of the Greater Washington area and throughout the east coast, the chance to enjoy America’s favorite pastime in our Nation’s Capital. The event has received numerous awards such as being named “One of Five Can’t Miss Summer Festivals in the Country” by CNN, “Top 10 BBQ Event” by The Travel Channel, “One of America’s Best BBQ Competitions” by Saveur Magazine and “An Event Worth Traveling To” by American Bus Association, just to name a few.

Pennsylvania Avenue will be smoking with lots of great BBQ cooked up by America’s Top Chefs from across the country. This two-day festival features teams competing for their share of Cash & Prizes throughout the weekend. Contests include Military Chef Cook-Off benefiting the USO Military Chef cook-off in which attendees will be given the opportunity to taste and vote for their favorite BBQ prepared by Military Chef representing the Army, Navy, Air Force, Marines and Coast Guard.  Other contests include the National Pork Board’s National Pork BBQ Championship, Smithfield Rib Contest & Perdue Sizzlin' Chicken Contest.

The Taste of Giant Sampling Pavilion "longer than a football Field" offers a line-up of delicious and tempting FREE BBQ & Grilled food samples, while Cookbook Authors and Celebrity Chef’s like Myron Mixon Moe Cason and Tuffy Stone, Destination America’s popular “BBQ Pitmasters” entertain and educate with cooking demonstrations on the popular Giant Demonstration Stage. There’s something for everyone’s musical tastes with an eclectic mix of more than 30 bands on three stages performing Rock, Reggae, Jazz, Blues, R&B and Gogo.  While entertaining so many food, music and fun-lovers, the Giant Barbecue Battle has raised millions of dollars for Washington area Charities and donated tons of food to area Food Banks. This year's Giant BBQ Battle will raise funds for the USO of Metropolitan Washington with the Capital Area Food Bank.

For more information, visit www.BBQDC.com We’ll See You, at the B-B-Q!

Event is held Rain or Shine, all sales are final, sorry no refunds.