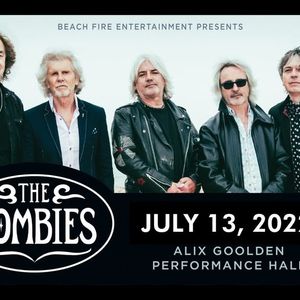 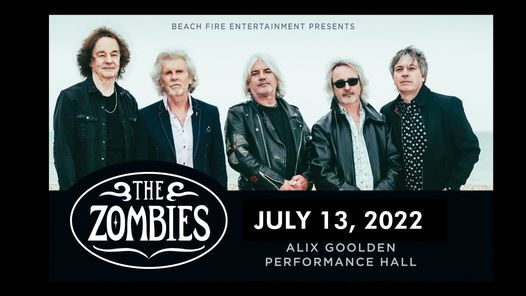 If you need a refund please reply to the email that was sent to your email associated with your Eventbrite Account. Or you can reach out too Ym94b2ZmaWNlIHwgdmNtICEgYmMgISBjYQ==

Iconic British psychedelic pop legends The Zombies ​have returned to celebrate theirlong-awaited Induction into ​The Rock & Roll Hall of Fame. ​After receiving their 4th nominationin 5 years, the support for The Zombies’ induction among the public and their peers wasundeniable - the band placed 4th in the public online poll with over 330,000 votes, while evenfellow nominee John Prine called for their induction before his own in a Billboard interview. OnMarch 29, 2019 at Brooklyn’s Barclays Center, The Zombies joined Stevie Nicks, Radiohead, TheCure, Def Leppard, Janet Jackson, and Roxy Music as the 2019 Class of The Rock & Roll Hall ofFame. Fittingly, the Induction Ceremony took place exactly 50 years to-the-day after TheZombies’ classic ​“Time of the Season”​ first hit #1 on the charts in America.

Never content to only look back, and despite a busy touring schedule, The Zombies are also inthe studio recording the follow-up to their 2015 ​Billboard​-charting album, ​Still Got ThatHunger​. Led by founding members, vocalist ​Colin Blunstone​ and keyboardist ​Rod Argent​, TheZombies’ 21st-Century line-up features ​Steve Rodford​ on drums, renowned sessionguitarist ​Tom Toomey​, and the newest member, ​Søren Koch​, who joined the band followingthe untimely passing of their beloved bassist ​Jim Rodford​ (formerly of ​ARGENT​ and ​The Kinks​)in early 2018.

The band’s live performances, ​described by ​Rolling Stone​ as ​“absolutely triumphant”​, takefans on a journey through time, from their early hits...their 1968 masterpiece ​Odessey &Oracle​...post-Zombies solo favorites...right to today with ​Still Got That Hunger​.

The second U.K. band following the Beatles to score a #1 hit in America, ​The Zombies​ infiltratedthe airwaves with the sophisticated melodies, breathy vocals, choral back-up harmonies andjazzy keyboard riffs of their 1960’s hit singles ​“She’s Not There”​ and ​“Tell Her No.”​ Ironically,the group broke-up just prior to achieving their greatest success – the worldwide chart-toppingsingle ​“Time of the Season,”​ from their swan-song album ​Odessey & Oracle​, ranked ​#100 inRolling Stone’s ‘500 Greatest Albums of All Time​.​’ To this day, generations of new bands havecited The Zombies’ work as pop touchstones, and the band continues to be embraced by newgenerations of fans.

Following the break-up of the original band, lead vocalist ​Colin Blunstone​ went on to developan acclaimed solo career (with hits including ​"Say You Don't Mind," "What Becomes of theBrokenhearted",​ and ​“Old & Wise” with Alan Parsons Project​) and keyboardist/songwriterRod Argent​ rocked ‘70’s arenas with his eponymous band ​ARGENT (“Hold Your Head Up,”“God Gave Rock ‘n’ Roll To You”​), but the legend of The Zombies continued to take on a life ofits own. By the start of the new Millennium, Blunstone and Argent were inspired to resurrectThe Zombies.

The explosive release of ​Still Got That Hunger ​proved that Zombies fever is stronger than ever,with premieres at ​Rolling Stone​, ​Mojo​, ​The Wall Street Journal, The Guardian Speakeasy​,and ​Spin, ​alongside special broadcast performances, including​ Later...With Jools Holland, TheTonight Show with Jimmy Fallon, Conan, The Late Show With Stephen Colbert, CBS SaturdayMorning ​and ​AOL Sessions. ​Moreover, it marked a historical moment on the ​Billboard ​charts, the Zombies’ critically acclaimed album ​Odessey And Oracle ​re-entered the Billboard 100forty-eight years later at the same time as ​Still Got That Hunger​!

The band’s 2019 Rock & Roll Hall of Fame Induction marked a major triumph in their 5-decadecareer, but you can be sure they will not rest on their laurels. The Zombies story continueson....!

Tickets for The Zombies Victoria BC can be booked here. 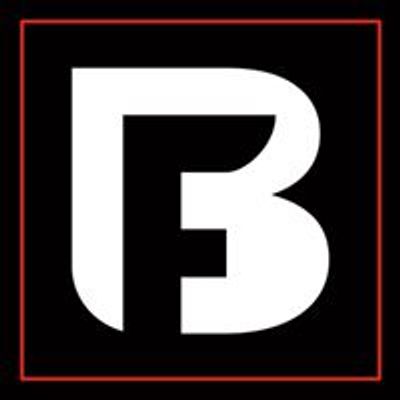