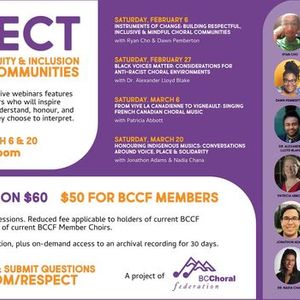 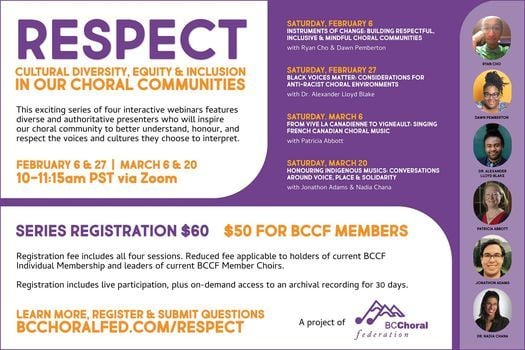 This exciting series of four interactive webinars features diverse and authoritative presenters who will inspire our choral community to better understand, honour, and respect the voices and cultures they choose to interpret.

In the context of all that is happening in our world, cultural diversity is of utmost importance for our choral community. The Black Lives Matter movement and Indigenous efforts to reclaim traditions, and heal from the legacy of colonialism and residential schools require of our predominantly white choral world to learn and inform our performance practices with compassion, respect and integrity. Our purpose in offering this series of webinars is to create a safe environment where we can challenge ourselves to envision a more diverse, inclusive, just, and equitable choral community: a community where all voices can flourish and all cultures will be honoured, celebrated and respected. These workshops will be of interest to choral singers, Artistic Directors, conductors, composers, arrangers, music educators, church choirs, and boards of directors.

Proudly presented by the BC Choral Federation.

Ryan and Dawn will share ways to create culturally inclusive choral communities. Participants will learn how cultural appropriation, tokenism, and colonization impact our musical choices, and what we can do to navigate and address them. They will explore how we can create culturally inclusive choral communities through action and awareness. They will encourage us to appreciate the history and future of the medium of choral music and identify ways we can re-imagine and transform it. They will share tools to empower choral directors, singers and organizations to seek justice and honour equality, diversity and inclusion in choir cultures. We’ll discuss topics such as cultural appropriation, tokenism, and colonization and how they impact our musical choices.

Ryan Cho is a Vancouver based music educator and social justice teacher. A second generation Chinese Canadian, Ryan has received awards related to anti-racism and equity issues, but is still constantly practicing humility and changing his mind on the things he has been convinced of or taken for granted. Ryan serves as a choral director and arranger. He teaches music, social studies, and EAL at Terry Fox Secondary in Port Coquitlam. He sang with the Chor Leoni Men’ s Choir for over a decade, is a former member of ES Choir (a part of the East Van Choir Collective). He is a part of Ache Brasil Capoeira working as a (gringo) musician with their paid performance group, teaching Brazilian martial arts, and leading (and learning) as one of the music co-directors of the group’s student bands over the last few years.

Dawn is the founder and artistic director of the Roots ‘N’ Wings Women’s Choir and teaches master classes and workshops all over Canada. In past years, she directed the Voice Ensemble and Youth Choirs at the Sarah McLachlan School of Music. Dawn is a member of the BC Choral Mentorship Program and has been studying choral conducting and vocal pedagogy with Dr. Geoffrey Boers (University of Washington) and Richard Nace since 2011.

This talk will include the description of the Black Voices Matter pledge, how to engage in meaningful conversations around diversity, and steps to take in order to create equitable environments. Alexander will share his work with the Black Voices Matter Pledge of Anti-Racism in Choral Practice which he hopes will guide the choral community to a more just and equitable place where all voices can flourish.

Dr. Blake is a recognized conductor, composer/arranger, singer, and music activist. He is the co-author of the Black Voices Matter Pledge of Anti-Racism in Choral Practice. He is the Founding Artistic Director of Tonality, a new choral ensemble focused on spreading a message of unity, peace, and social justice through a culturally diverse choral setting. He also serves as the Choir Director at Los Angeles County High School for the Arts. He is the Principal Associate Conductor of the National Children’s Chorus in Los Angeles and New York City. Blake has recently been commissioned by the New York City professional ensemble, Inspire to compose a work on environmental justice. Blake completed his Doctorate in Musical Arts degree at the University of Southern California in 2019.

French Canadian music is a rich component of our national choral landscape and a source of great repertoire for your programming. In order to sing it with confidence, success and respect, an understanding of its history, provenance and the language itself is key. Pat Abbott will guide us through different genres — folk and original music, both classical and popular — as well as the appropriate language and tone to use whether arranging or performing it.

With deep ancestral roots in French culture stretching back to the 16th century, Patricia leads workshops across Canada and internationally on the performance of French Canadian music. She is a singer, teacher and arts administrator in Montreal where she conducts several choirs including the Chorale du Gesù women’s choir, the English Montreal School Board Chorale, l’Ensemble vocal Cantivo and Les Voix du Carrefour. She is a lecturer at the Schulich School of Music, McGill University and at the Université de Sherbrooke. Patricia served as Artistic Director of the Canadian Amateur Music Centre in the Quebec Laurentians and was the Executive Director of the Association of Canadian Choral Communities (now Choral Canada). She has received many awards including the National Choral Award for Distinguished Service from ACCC, the Ordre du mérite choral from the Alliance des chorales du Québec, and the Queen Elizabeth II Diamond Jubilee Medal. Pat obtained a Master’s degree in voice performance and vocal pedagogy from McGill University.

We are Jonathon Adams and Nadia Chana. We grew up singing together in choir in Amiskwaciwâskahikan (Edmonton) and reconnected years later, which led to many fertile conversations about our relationships to decolonial processes in our work and music-making. We invite you to listen in on one of these conversations.

Born in amiskwaciwâskahikan (Edmonton), Jonathon is a baritone of Cree-Métis descent. Passionate about imagining the cross-cultural sounds of music in the colonies, Jonathon combines music from the Metis Songbook with early European music. They recently performed as a soloist with the Against the Grain Theatre’s daring new interpretation of Handel’s Messiah. Messiah/Complex is a cross-Canada performance with 11 vocalists and 4 choirs from across Canada. Jonathon attended the Royal Academy of Music and the Conservatorium van Amsterdam, and has sung in a variety of choral settings as well as having a successful career as a soloist. They are currently living in The Netherlands where they hold the Netherlands Bach Society’s “Young Bach Fellowship”.

Dr. Nadia Chana is an assistant professor of ethnomusicology at UW-Madison’s Mead Witter School of Music, and an affiliate faculty member both of Project Spectrum, and of UW’s Centre for History, Culture, and the Environment. Her recent dissertation, Listening on Indigenous Land: Method, Context, Crisis included fieldwork in northern Alberta to consider how singing and listening become critical tools for building a felt relationship with a more-than-human world. Nadia is interested in voice (audible and metaphoric), racialization, embodiment, practice-based ways of knowing, Indigenous–settler relations, settler-colonialism, nonhuman agency, and experimental and collaborative ethnography. While Nadia situates her work within music studies, thinkers in critical Indigenous studies and feminist science studies have often been her guiding stars.

Tickets for Respect – Workshops on Cultural Diversity, Equity & Inclusion can be booked here. BC Choral Federation (BCCF)
Follow Contact
About The Host: The BCCF is actively involved in promoting and encouraging choral activity throughout the province of BC. Our members are singers, music educators, conductors and organizations passionate about the benefits of singing in groups.
Website Link: http://www.bcchoralfed.com/
Are you the host?
Nearby Hotels BC Choral Federation (BCCF), P.O. Box 4397, Terminal Main, Vancouver, BC, Canada V6B 3Z8, Vancouver, Canada
Report a problem ?