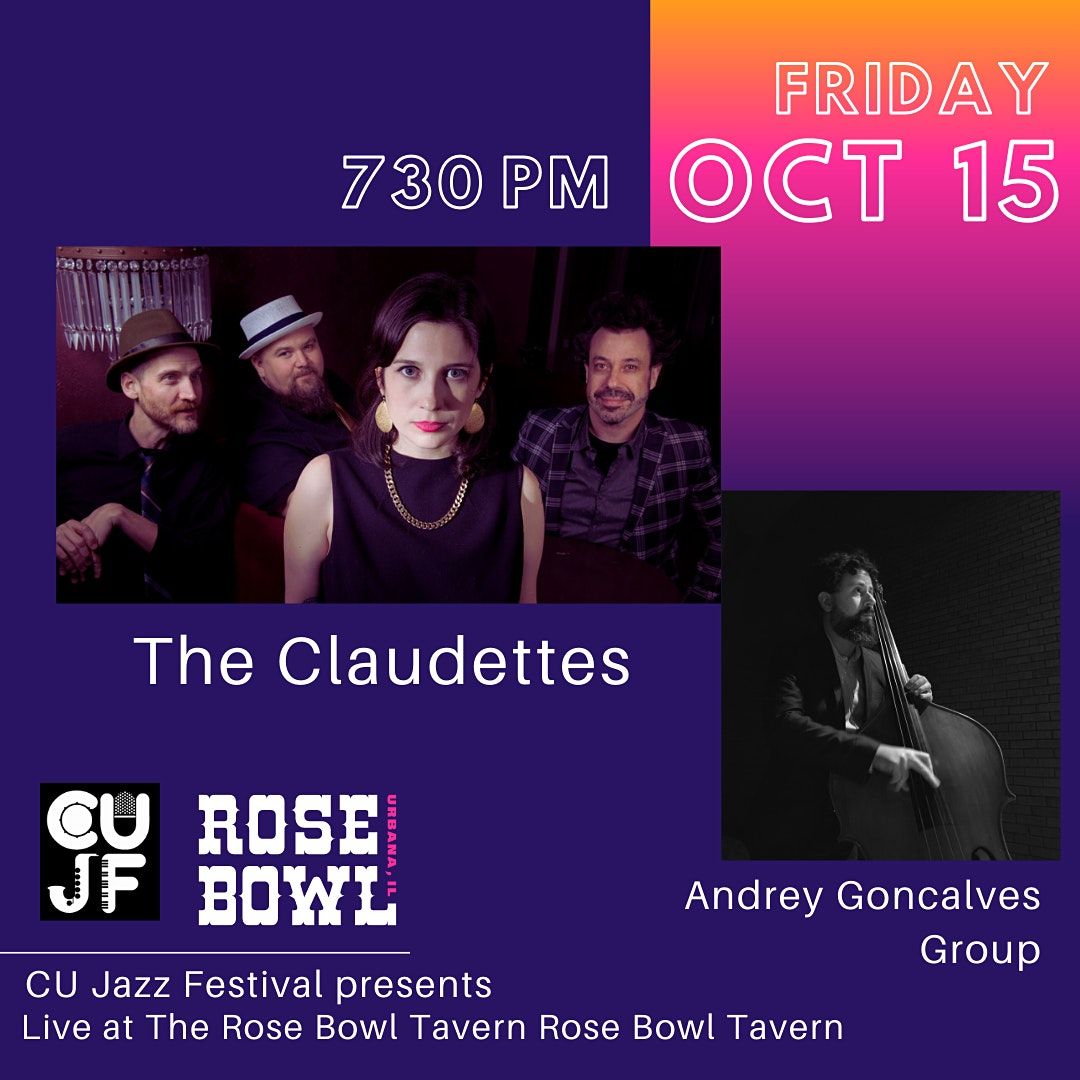 *Show is rain or shine*

- show will be outside pending weather- no reserved seating. Seats/tables are on a 1st come 1st serve basis. Get here early!

The Claudettes fuse Chicago piano blues with the full-throttle energy of rockabilly and punk and the sultriness of soul to write a thrilling new chapter in American roots music. Johnny Iguana pounds the piano alongside seductive singer Berit Ulseth, bassist/guitarist/singer Zach Verdoorn and drummer Michael Caskey. Johnny, who toured for years with his cult-favorite rock band oh my god, is also in the Grammy-nominated groups Chicago Blues: A Living History and the Muddy Waters 100 Band. He has toured/recorded with Junior Wells, Buddy Guy, Otis Rush and more and played piano on the new Chicago Plays the Stones album featuring Mick Jagger, Keith Richards and Buddy Guy. The Claudettes recorded their 2018 album DANCE

Andrey Gonçalves is an Illinois transplant Brazilian bassist. He is currently pursuing a Doctorate in Jazz Studies at the University of Illinois Urbana-Champaign, where he taught the bass studio for three years and directed several combos/big bands as a graduate teaching assistant. His dissertation focuses on whole-body engagement and preventative care in bass playing, blending music education with kinesiology, and healthy habits in music performance. In August 2020, Andrey Gonçalves started his appointment as an Adjunct Bass Teacher at Olivet Nazarene.

As a bassist, Mr. Gonçalves has performed with jazz names such as Frank Gambale, Chuchito Valdés, and Ron Bridgewater; the Champaign-Urbana Symphonic Orchestra, the Champaign-Urbana Civic Orchestra, and Sacred Winds Ensemble; the cellist Ben Sollee, and the trombone quartet Maniacal 4. Also, he has toured Europe, the USA, and Argentina. As a studio musician, he has recorded bass tracks for more than twenty albums, produced five records, and composed three computer game soundtracks.

Celebrating his eighth year of a music career in the US, Andrey released his first record in November 2020. The album, entitled Nocturnal Geometries, encompasses the music created over one year of composition lessons under the tutelage of professor Jim Pugh (Chick Corea, Steely Dan).

In September, Mr. Gonçalves will return to the studio to record “OZT: The Broken Suite,” a piece with a heavy influence of Brazilian music. The movements will focus on the electronic part of instrumental music and display a unique ensemble that bets on styles such as BAM, Afro-Caribbean music, and Fusion.

Andrey will perform OZT for the first time at the CU Jazz Festival. This concert will introduce the story that generated the Suite through soundscape immersion and interaction between the band and the crowd.

You may also like the following events from Rose Bowl Tavern:

Tickets for The Claudettes with Andrey Goncalves Group can be booked here.