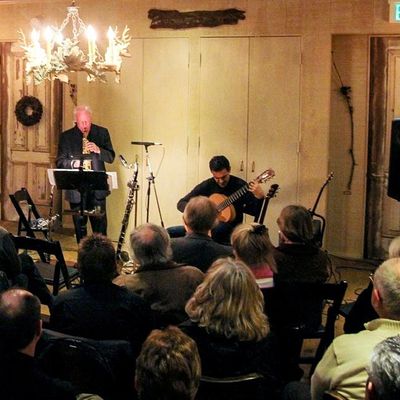 The informal series of “Concerts with Conversation” at Upper Lake’s Tallman Hotel in the winter and spring of each year.

Each fall and winter, the Tallman Hotel hosts a series of monthly intimate and informal Sunday afternoon house concerts in the Meeting House next to the Hotel. Today, noted Northern California songstress PAULA SAMONTE will be backed by the veteran jazz pianist BARNEY MCCLURE and bassist PIERRE ARCHAIN.

Because of COVID precautions, we will be limiting the audience to those with proof of vaccination. We will also take extra ventilation precautions in the Meeting House and limit audience size to allow for social distancing.

Paula Samonte, whose vocal performance of Big Band sounds will be on display today, has decades of national and international touring notched on her belt. She is a favorite in Mendocino and Lake Counties became a vocalist with pipes powerful enough to front the entire Ukiah Symphony.

Barney McClure has been everywhere and done it all. He has seven feature CDs on the market and one book on improvisational theory entitled There Is No Such Thing As A Mistake. The book is a “how-to” on improvisational jazz and is a popular hit with teachers who use it as a curriculum guide, and with instrumentalists and vocalists at any level who can use it as a self-help guide.

Pierre Archain grew up in the South of France where he developed an interest in music in his teens. He was inspired to further his musical career as a bassist by his exposure to many types of music, especially jazz. Motivated to go to the heart of the jazz scene, he emigrated to New York City in 1979 and eventually moved further west to the Bay Area, where he lived for 37 years.

Tickets for Concerts with Conversation - Paula Samonte can be booked here.