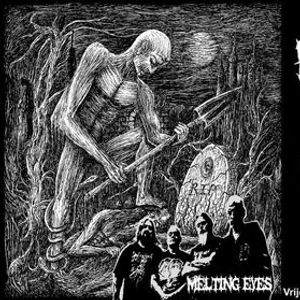 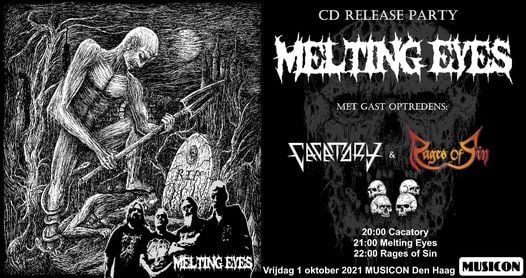 The history of Melting Eyes goes back to Feb. 2017 when Ben Ubert guitar (ex deathhammer & Warmaster) and Marc vd Meer drums (ex Compos Mentis NLD) decide to start an old school deathmetal band.
Within a short time Angelo Verlaan (ex Winterfell, CHAOS and many more) joined them on bass. After ¾ year rehearsing and writing songs Pier Segaar ( guitar in The Impaler, ex Constant Paranoia) joined the band on vocals. Pier first did the vocals only but after a while he brought his guitar with him and started to do the vocals and guitar.
After a while the first gig came at the “Westland Metal meeting” which was quite a succesfull gig with lots of great feedback. More gigs came for Melting Eyes and shared stages with bands like “Gruesome - Nervochaos - Graceless - Rages Of Sins - Acrid and more that all took place in local area Den Haag , Leiden and Westland.
After a few tries to record themselves an EP/Album Melting Eyes decide to enter the studio in Nov. 2020 to record their debut EP My Final Resting Place which contains six tracks of evil fucking old school deathmetal that were be released Aug 1 2021.

From The Hague, Holland hails RAGES OF SIN (R.O.S.), a deathrash act that was established back in 2009. The first few years of the band’s existence the Dutchies have tried to simply capture what excites them about song writing, performing and used their early days to create songs that RA(n)GE from thrash metal riffing to pounding death metal and some acoustic interferences that every now and then can turn progressive.

The individual band members are highly inspired by Sweden’s melodic death metal sound which is represented by bands such as Hypocrisy, Opeth and Soilwork. RAGES OF SIN however are not copycatting aforementioned acts, rather applying some of their roots and principles to their hell-bent music. Lyrically, the quartet derives their inspiration from contemporary SINners, focussing on the 'WTF-factor' of what people can do to each other and their offspring. Truth really seems to be stranger than fiction...

RAGES OF SIN debuted with a self-titled self-released four track demo CD in 2010 which allowed the band to play dozens of shows in The Netherlands and abroad (Belgium, Germany and Switzerland). R.O.S. were the opening act at the (one time only) metal stage on 2015’s Schollenpop festival which allowed the RAGERS to play in front of 10.000 metal fans.

In 2018, another 4-track EP ‘The Gospel Of…’ was self-released by the band, but distributed by Pt78 Records.

2019 heralded a new creative phase, culminating in 2020 with the ambitious full length concept album 'DIVERGENCE'. With an overall theme of things not being as they seem, reviews were unanimously positive about the sheer musical variety on the album, adding 'Progressive' to the ever growing list of R.O.S. style descriptors.

‘The Gospel Of…’ was recorded at the renowned Split Second Sound studio in Amsterdam, The Netherlands with Jochem Jacobs, who has been involved with mixing, mastering and the production of Textures, Epica, Stream Of Passion, Heidevolk and Izegrim.

Both the Gospel and DIVERGENCE were engineered and mastered by Tommie Bonajo (Blind Sight, From Earth) of Tomster studios.

Cacatory is a melodic death metal band from Holland.

You may also like the following events from Musicon:

Tickets for Melting Eyes + Rages Of Sin+ Cacatory can be booked here.