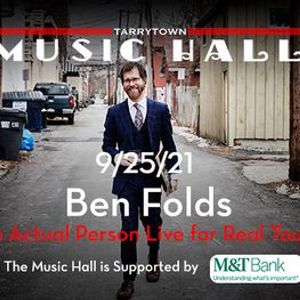 Ben Folds is widely regarded as one of the major music influencers of our generation. He's created an enormous body of genre-bending music that includes pop albums with Ben Folds Five, multiple solo albums, and numerous collaborative records. His last album was a blend of pop songs and his Concerto for Piano and Orchestra that soared to #1 on both the Billboard classical and classical crossover charts. For over a decade he's performed with some of the world's greatest symphony orchestras, and currently serves as the first ever Artistic Advisor to the National Symphony Orchestra at the Kennedy Center. In addition to solo rock and orchestral touring, Folds released his first book -- a collection of interrelated essays, anecdotes and lessons about art, life and music -- in 2019, which debuted as a New York Times Best Seller, and is currently hosting a podcast series spinoff of his book entitled "Lightning Bugs: Conversations with Ben Folds."

You may also like the following events from Erin McKeown: