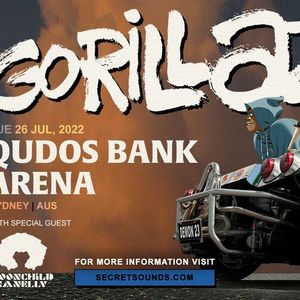 Long before online concerts and festivals became a thing, one truly trailblazing band ruled the virtual space, seamlessly meshing music, art and technology like no other.

Gorillaz made an emotional return to the live stage last month with two sold-out shows at London’s O2 Arena. The performance on 10 August, to thank and recognise NHS frontline workers, saw the band debut all three new tracks from their new EP ‘Meanwhile', the band’s joyous homage to the iconic Notting Hill Carnival. The 2000 Carnival signalled the start of something big for Gorillaz with their first ever outing, a performance of ‘Clint Eastwood’ at the Middle Row Records sound system in Meanwhile Gardens, W10. ‘Meanwhile’ is three tracks in celebration of that moment and the unique and inclusive spirit of Carnival.

And now the Carnival is heading down under! Don’t miss Gorillaz' first Australian dates in over a decade!

You may also like the following events from Secret Sounds:

Tickets for Gorillaz - Sydney can be booked here.