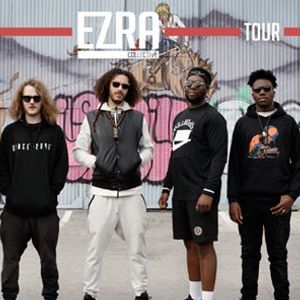 Having thrilled fans across Europe and the US - including a rapturous recent appearance at Glastonbury - London five-piece Ezra Collective now turn their attention to the Southern Hemisphere, announcing their first run of appearances in Australia and New Zealand this March (presented by Astral People & Handsome Tours). Alongside slots at Golden Plains (VIC), Womadelaide (Adelaide) and Womad New Zealand, the band will be playing special headline shows in Sydney and Melbourne - with their powerful live show bound to win them plenty of new fans as well as satisfying their long-standing supporters.

The band have had a huge few years, touring and writing, with their debut album You Can't Steal My Joy unleashed to significant acclaim earlier this year. An exuberant, defiant record, it features friends and fans, Loyle Carner, KOKOROKO and Jorja Smith, it showcases the band's unique energy, with NME calling it 'an urgent, free-wheeling bundle of fun, that adds joy to new wave'.

Tickets for Ezra Collective (UK) - Melbourne can be booked here.