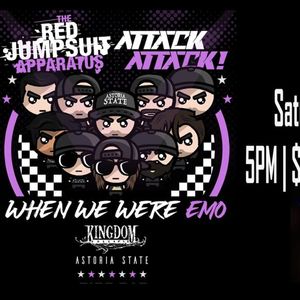 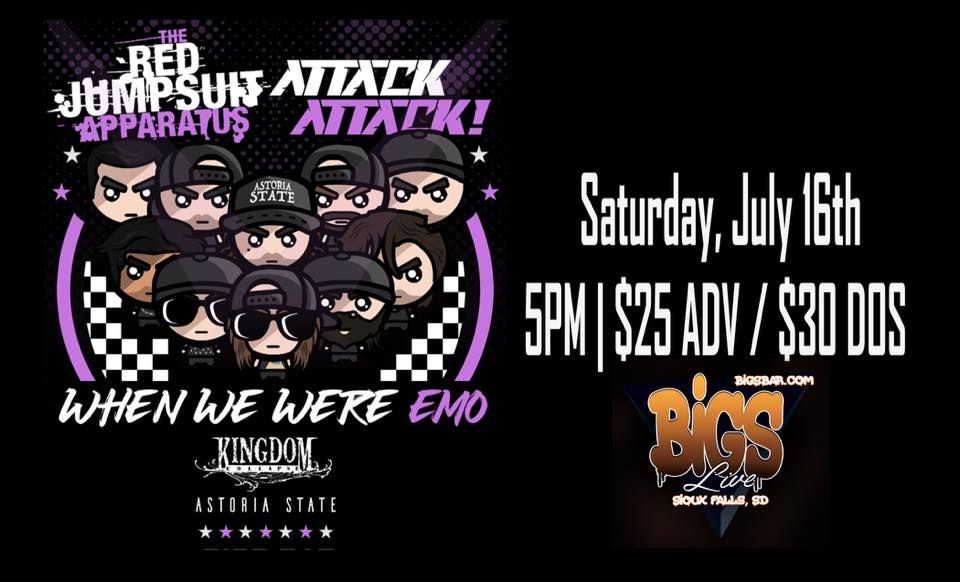 The Red Jumpsuit Apparatus//Attack Attack! 'When We Were Emo' Tour

ON-SALE: Friday, April 8th @ 11 AM
The Red Jumpsuit Apparatus//Attack Attack! w/ Kingdom Collapse | Astoria State | WORK OF WOLVES
Red Jumpsuit Apparatus - One of the few emo bands to sell over one million albums and have had 7 Billboard # 1 songs after leaving Virgin records in 2010. The Red Jumpsuit Apparatus is a Rock band with spiritual tones formed in 2003 and is family owned and operated.
Attack Attack! - If you went to Warped Tour in the mid 2000’s, shopped at Hot Topic, or were active on Myspace; then you have heard the name “Attack Attack!” While the band’s career was relatively short-lived, their reputation has done nothing but grow since the band went on indefinite hiatus in 2013. Known for incorporating dance/electronica music with metal, the band consistently bent the rules of songwriting. They took the sounds they liked and crafted seemingly incompatible genres into anthems for local Ohio scene kids, and later, audiences across the globe. After years of silence, Attack Attack! has exploded back onto the scene. They’re here to remind you that rules are made to be broken, adversity is meant to be overcome, and that legends never die.

You may also like the following events from Nice Enough Ent.:

Tickets for The Red Jumpsuit Apparatus//Attack Attack! at Bigs Bar Live can be booked here.