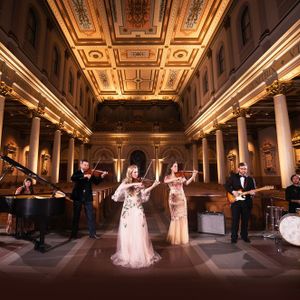 "The First Family of American Music"

From the roots of the Grand Ole Opry to the wings of Carnegie Hall, the Annie Moses Band has been taking music to new heights for more than a decade.

As the "first family of American music," this sibling band applies its classically honed, all-American talent to a cornucopia of iconic melodies through innovative arrangements and masterful original songwriting.

She died young, but her legacy lives on, first in Jane's, Julie Andrews-style soprano which graced small country churches across the fruited plain, and then in the award-winning Nashville songwriting of our mother, Robin and our father, Bill.

Intensive classical training took us to the halls of the Juilliard School where the iconic sound of the Annie Moses Band took shape - blending the world of classical finesse with the heart of a hardscrabble family history.

Over 15 years later, the Annie Moses Band has recorded more than a dozen albums, produced Emmy-nominated PBS specials, traveled to Europe and Asia, and performed on stages as diverse as Carnegie Hall and the Grand Ole Opry.

Tickets for Annie Moses Band - Christmas can be booked here.