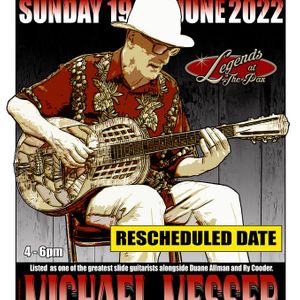 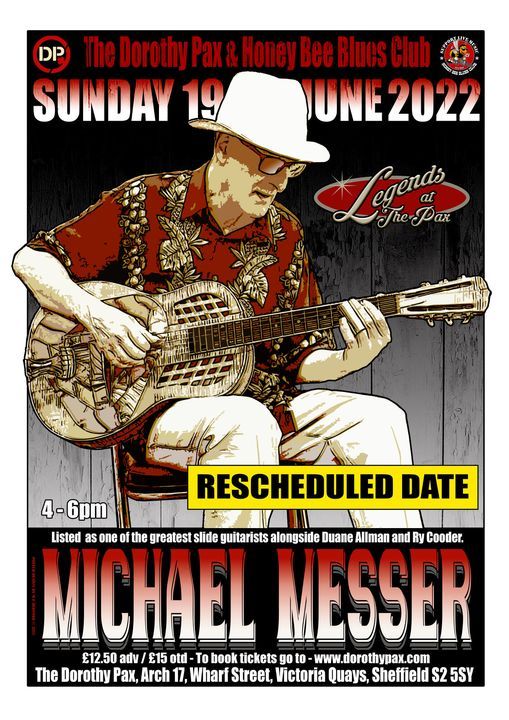 No. 3 in our 'Living Legends' gigs, we are very proud to welcome him back. Michael Messer is a virtuoso slide guitarist, singer, and blues innovator.

Throughout his thirty five year recording career, his music has remained individual and contemporary. Michael Messer's reputation as an innovator of the blues and master of slide guitar is well known.
Being British with an international reputation for blues slide guitar is a rarity in itself, but Messer's obsessive appetite for knowledge of his art is virtually unrivalled. His stunning slide guitar playing and superb vocals, ooze authenticity and integrity, and his use of turntables in the Second Mind Band marked him as one of the trailblazers of the 21st century blues sound.

His current band, Michael Messer's Mitra, is once again breaking new ground, playing an exhilarating and accessible fusion of rural blues and Hindustani classical music. Their highly acclaimed debut album, Call Of The Blues, released in 2016, was iTunes No1 blues album and has won them worldwide acclaim, receiving radio airplay in more than 40 countries.

Johnny Cash was a fan of Michael Messer's music and wrote the liner notes for his 1993 album Rhythm Oil, a rare honour shared only with Bob Dylan on Nashville Skyline. Rhythm Oil was awarded Import Album of the Year by the Austin, Texas, music press. Messer's King Guitar album reached number one in the US Living Blues chart, and the American magazine Spirit has listed Michael Messer as one of the greatest slide guitarists ever, alongside Duane Allman and Ry Cooder. Michael's album Second Mind won Best International Guitar Album of the Year, and he is included in the Virgin Encyclopaedia of the Blues.

You may also like the following events from The Dorothy Pax:

The Dorothy Pax
Follow Contact
About The Host: We're a delightful space situated within Victoria Quays...we welcome equally as delightful people to enjoy the space with us. Nudge us dorothypax@gmail.com
Website Link: http://www.dorothypax.com/
Are you the host?
Nearby Hotels The Dorothy Pax, Arch 17, Wharf Street, Victoria Quays, Sheffield, United Kingdom
Report a problem ?