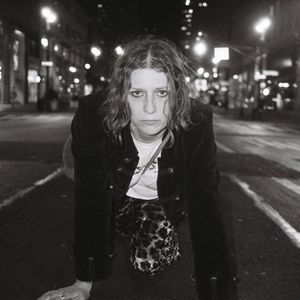 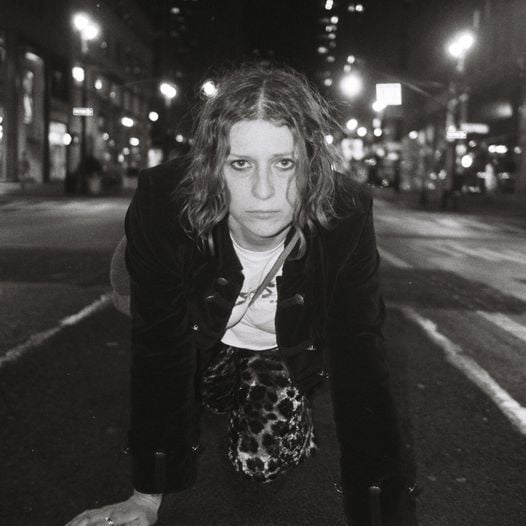 On the porch of her one-time Nashville home, Liz Cooper had a multimedia project
that combined two of her loves: lips and cigarettes. She painted her own lips
with red paint and kissed a canvas two or three hundred times, later dotting
them with the detritus left behind in ashtrays by her friends. An overlap of
intimacy, indulgence, cheekiness, and sensuality, the piece complements Cooper's
roiling second record, Hot Sass. Over jagged, frenetic guitar parts, Cooper sets
expectations aflame with the record's title track. Her songs unfurl like smoke
spiraling off an incense cone late in the afternoon, with Cooper pushing deeper
into psychedelic openness, punk ferocity, and beyond.

Hot Sass marks multiple departures for Liz Cooper: from her nine-year home of
Nashville, from her band addendum of the Stampede, from any genre-burdened
expectations she'd accumulated over the years. After heavy touring in support of
2018's Window Flowers, where her songs stretched out in live settings, she felt
constricted by the Americana-adjacent associations that the Stampede carried. So
with her bandmates' blessing, she dropped the moniker, pursuing sounds and songs
that let her chase the inspiration lent to her by the likes of Courtney Love,
Lou Reed, and David Bowie.

In Burlington, Vermont, Cooper and her cohort -- Ryan Usher, Joe Bisirri, and
Michael Libramento -- recorded Hot Sass at Little Jamaica, the personal
studio/private residence of producer Benny Yurco (Michael Nau). The intimacy of
the space and the players' provided a wide-open approach to Yurco's live setup
for rolling forward with minimal takes, a sensibility abetted by a whole lot of
psychedelic mushrooms consumed in the process. Cooper recorded her guitar parts
from the kitchen and living room while Usher played drums in a bedroom.

Completing Hot Sass, Cooper realized she needed a change of scenery from her
longtime home of Nashville, where she'd lived in a freewheeling house of
itinerant artists known as the Pennock Palace. She settled in Brooklyn at the
beginning of March 2020, and found herself confronted with the new challenges of
staying still as touring ground to a halt.

"I'm learning more about how to take care of myself -- just facing the darkness
head on that I've been running from by being on tour and being so busy my whole
life. It's taught me more about what kind of artist I want to be and what kind
of person I want to be," she says.

But now, Hot Sass is crackling into public life, charging forward with Cooper's
revitalized creative energy. Her Nashville confidant Daniel Yocum, a painter and
friend who collaborated with her on the music videos for Hot Sass, first
encouraged Cooper to pick up the practice for herself. She's finding new mediums
to explore in paints and pedals, discovering even more exciting, untamed space
to be herself.

Where did the concept of "hot sass" come from, and how did it become the central
focus of your record?

It's something that scares me. It's another part of myself that I'd never really
show. It's something that pushes me that goes hand in hand with me not hiding
behind a band's name anymore. It is this other side of me, this wild side.

I feel like it is this madness that I've been more comfortable with accepting
and like, this fucking attitude that I do possess that I've been hiding from.
It's this confidence and sexiness, it's something that I've always been very
afraid of. It's me learning about what kind of woman I am and It's not pretty
all the time. It's not this thing that you can put in a box. I'm inspired by
women who speak their mind, and who don't give a fuck what people think about
them.

There's a sense of restlessness that carries across the record, and right after
you finished it, you left Nashville for New York. How did that feeling make its
way into the songs?

A big thing about touring is how you're not really able to reflect, you're just
so in the moment all the time, and you're always surrounded by people. I am an
introvert, and I feel like I have to refuel by being by myself, which is
literally impossible when you're on the road. I was exhausted. But I think it's
also a lot of growth and just learning about myself and trying to be confident.
I've always struggled with my confidence and self worth, and facing that.

What was your approach with beginning to write Hot Sass? Where were you trying
to push yourself musically?

Really what the beginning of it was, was, very organically and naturally, I met
Benny Yurco, who is a fucking creative genius. I just texted him one day, and I
was like, "I want to make a record with you." And he was like, "Let's do it." So
really that was the beginning push for me to be creating with an artist that I
really respected. I knew I had to really bring it for him and for myself.

I wrote this album on the road and any chance I could find, so in between
soundcheck and the show, I would hide in the van, or I would write in motel
bathrooms. Whenever I'd get home for however long, which is not usually very
long, I would just dive in and write.

As soon as we got to Benny's, it was this complete safe haven. All of us trust
each other so much, and we let our guards down completely. We flew through
recording these songs and tracked the drums, the bass, guitar, and vocals all
live. There was no intention besides just making the best song and without any
ego.

You spent a few years touring pretty heavily, even by a lot of musicians'
standards, and you recorded most of Hot Sass live as a group. How has it been
going without that kind of in-person energy for the last year or so?

This is the longest I've gone without playing music my entire life. It's been
really important for me, because music is my spirituality and my release, and
I've never not had it. To take that away has been a total withdrawal, and an
incredible emotional roller coaster to be in an unfamiliar city with that.

It affected me a lot. I know that I needed that break, because it made me learn
more about myself: "Okay, well, if I can't just chase this thing all the time,
who am I without music? I'm still learning."

What has picking up painting meant to you over the last few years?

I've just been finding my voice with it just like music. And I definitely have
ideas of how I want to push boundaries with it. It's just another way to expose
my insides which scares me but also makes me feel whole and healed. I love to
paint because I don't feel any pressure from myself or from anyone else. It's
just fun and it's pure. Purely expressive. If I make something that is
horrifying and super shitty, I don't care. You move on, and you learn from it.
And that's it. Daniel [Yocum] is the one that really made me fall back in love
with it. We push each other, and we're gonna do some collaborations with visual
art beyond videos, see what we can dream up in the painting world.

What do you most want to get across with this record?

I'm not sure if there's anything specifically that I'm aiming to get across. I'm
still processing these songs. Still reflecting. And I think that's the thing --
Hot Sass is just a stamp in time of what was happening in my life. I just want
to continue making art that displays myself, the moments, and the people around
me.

Tickets for Liz Cooper can be booked here.