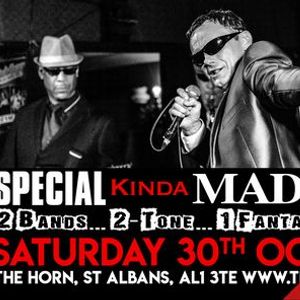 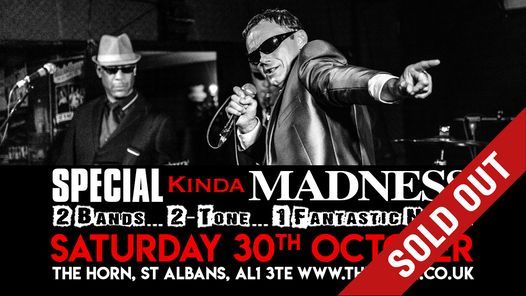 @[449398368430138:274:Special Kinda Madness]
"Back in 1979, pop was getting dull again. Everyone said it was time for a new dance. No-one expected it to come from Coventry. The 2-Tone revolution, led by the Specials, took the pop world by surprise with their infectious mix of Ska rhythms and punk attitude. Madness ... followed close on their heels. Within a matter of months the 2-Tone bands had stolen our hearts and conquered the charts with a non-stop procession of unforgettable hits: 'Gangsters', 'A Message to you Rudy', 'Too Much Too Young', 'The Prince', 'One Step Beyond', 'My Girl' ..."
An extract from Dance Craze by Garry Bushell

On 21st July 1979 at the Electric Ballroom in London, the Specials played a gig with Madness, Dexy's Midnight Runners and Selecter. That's a gig that all 2-Tone rude boys and rude girls would die to see, and thought would never happen. The Specials and Madness on the same bill!

In truth, it will probably never happen now ... but you can get the next best thing!

Special Kinda Madness play a truly authentic set from each band, matching the incredible energy of The Specials with the unforgettable iconic songs of Madness. Producing a show that will have the audience up and dancing from the start, Special Kinda Madness will have everyone hankering back to those exciting days of 2-Tone and Ska.

The Specials and Madness together. Wow! Catch'em now while you can!

AVAILABLE FROM THE FOLLOWING OUTLETS:

www.thehorn.co.uk
The Horn (from the bar)

Ages 14+ (Under 18s to be accompanied by a parent/guardian)

So you know what to do now, click on JOIN, then invite your friends and spread the word!

You may also like the following events from Special Kinda Madness:

Tickets for Special Kinda Madness | The Horn, St Albans can be booked here. 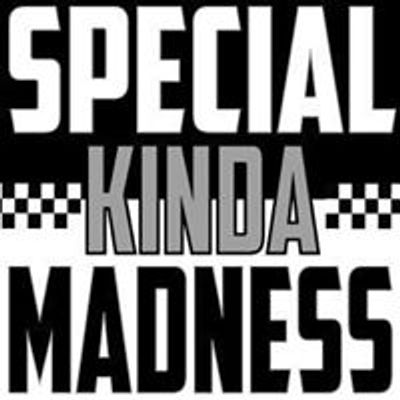 Special Kinda Madness
Follow Contact
About The Host: Special Kinda Madness are a Specials and Madness tribute act performing in venues across the UK. 2 Bands ... 2-Tone ... 1 Fantastic Night!
Website Link: http://www.specialkindamadness.com
Are you the host?
Nearby Hotels The Horn, The Horn, Victoria Street, Saint Albans, United Kingdom
Report a problem ?