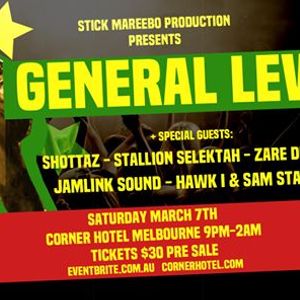 Di Jungliest General will be taking his 20/20 Australian tour to Melbourne on Saturday the 7th of March 2020.

Legendary uk ?? Ragga jungle Artist and uk soundsystem veteran mc .General Levy has been Iconic in the UK’s urban music scene since the late 80,s & early 90s. Serving his apprenticeship on the local sound system circuit in the mid to late 80,s then graduating to become a professional recording artist in the early 90,s releasing various reggae dancehall top ten records also an award winning album feat hits such as Heat, breeze, the wig, Champagne body, for fashion records, but His appearance in 1994 on the first jungle anthem the top the Uk mainstream Charts was the track “Incredible”. produced by M-Beat for an Independent jungle label, Renk Records.This kickstarted a Mainstream career that has seen his Music feat in Cult movies like Ali G in da house, bringing the General levy to new audiences the worldwide,seeing continued popularity to this day and marking its 25th anniversary in 2019.Recognised as one of the UK’s most booked MCs, Levy has moved confidently through ragga, jungle, and drum and bass, lending his quickfire delivery and lyrical flair to producers from the underground to the mainstream. New singles “Flex” with Fedde Le Grand and “Heater” with Chase & Status also featuring on uk Rapper Aj Traceys “Ladbroke Grove” Remix also classics & new up coming projects with Ed Solo and Deekline also Joe Ariwa and mad professor and the Ariwa family also DJ Bonnot and DJ Afghan from Italy ?? Also Heartical and Xray productions in France ?? to mention a few, Also appearing on radio 1Xtra for that classic moment alongside some of the cream of the crop of the current urban scene to create history on the mista jam show have clearly defined and confirmed General levy’s impact further established him as a dominant force in popular music, with 2018 and 2019 set to be banner years for this talented MC. Also check out General levy unofficial remixes on you tube, Shape of you remix alss also high grade smoker of the year. Herb herb herb, Addicted to the Grade also mixtapes catchy records and General levy ina de dance mixtape.Manners and Respect.

Tickets for General Levy 2020 Australian TouR can be booked here.

Jamaican Music & Food Festival
Follow Contact
About The Host: The Jamaican Music & Food Festival is the pinnacle of Jamaican culture in Australia. We combine the music and the food, two of Jamaica's biggest exports to the world. Each year we aim to take the festival that one step further, deep into the Jamaican way
website Link: http://www.jmff.com.au
Nearby Hotels Corner Hotel, 57 Swan Street, Richmond, Australia
Report a problem