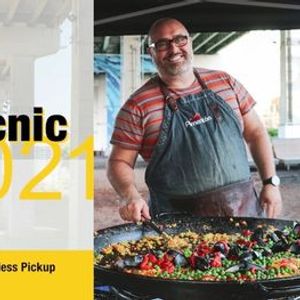 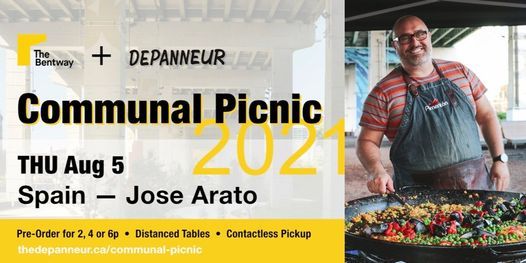 The Depanneur + The Bentway Communal Picnic 2021

Paella is often thought of as the Spanish national dish, but it is really a speciality of Valencia, though it has countless regional variations. This classic rice dish has five key ingredients: short-grain rice, saffron, pimentón (smoked paprika), olive oil and the large, shallow paellera pan from which the dish gets its name. José Arato, owner and Head Chef of Pimentón, will be preparing his paella live on site in his giant 100 cm wide paellera!
—–

Arugula, Chèvre & Beet Salad
Fresh and colourful, this classic combination of flavours is finished off with a mix of toasted seeds for a bit of crunch, and a side of crusty bread.

Crema Catalana
A traditional Spanish dessert similar to creme brûlée, but cooked on the stove instead of the oven. Crema catalana uses citrus peel and sometimes cinnamon to flavour the custard, and the crisp sugar crust is traditionally caramelized using a special small round hot iron.
-----

-----
Chef José Arato is the owner and Head Chef at Pimenton, a Toronto catering and gourmet food project specializing in Spanish and Mediterranean fine food.

You may also like the following events from The Depanneur:

The Depanneur
Follow Contact
About The Host: A place where interesting food things happen.
Website Link: https://thedepanneur.ca
Are you the host?
Nearby Hotels The Bentway, Rexdale, Canada
Report a problem ?