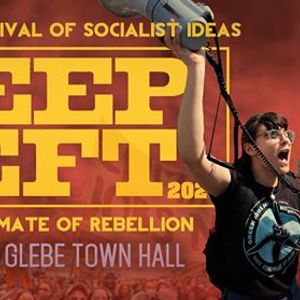 The world is in turmoil. We face the climate crisis and Morrison’s denialism, the growing economic and military tensions between the U.S. and China, immense inequality and the shocking rise of racism and the far right. But we are also seeing a global revolt from Hong Kong to Lebanon to Chile and Iraq. We need to rebel, resist and fight for radical change. Capitalism isn't working, another world is possible.

Come along to discuss, debate and join the rebellion. There will be 18 or more sessions, topics include: climate and capitalism, Marxism and revolution, border politics and imperialism, radical history, sexism and women's liberation and much more!

Professor Clinton Fernandes, Professor of international and political studies at UNSW Canberra and author of "Island off the Coast of Asia: Instruments of Statecraft in Australian Foreign Policy"

Get your tickets at www.keepleft.info

Tickets for Postponed | Keep Left 2020 can be booked here.