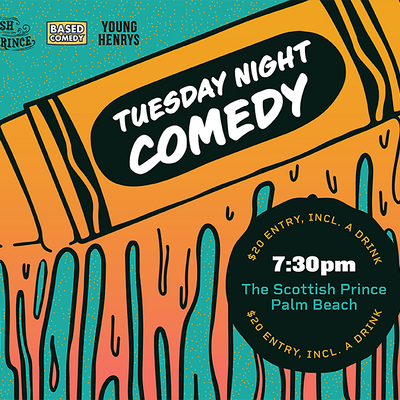 Based Comedy at The Scottish Prince every Tuesday night!

This Tuesday night we're so very excited to bring you two excellent Brisbane acts - one of whom we'd lost to Melbourne for a while but thank goodness he's stuck up here with us - it's the very clever and very funny Angus Gordon as your headline act, with the brilliant Kat Davidson hosting the show. With them, as always, will be some of Queensland's brightest new talents for a great night of comedy in Palm Beach.

Winner of the MICF Best Newcomer Award for 2017, winner of 2015’s RAW and featured on ABC’s Comedy Up Late, Angus Gordon’s mix of dry social critique and razor-sharp punchlines has made him a favourite around the country. Surrealist, bleak, deadpan – Angus is a favourite.

"...sad and hilarious – and completely original." THE GUARDIAN

"...this is a comedian who’s a bit up himself" CHORTLE UK

Seeing Kat on stage is like visiting an old friend you haven't met yet. She's shared the stage with the world's best comics (Stephen K Amos, Steven Wright, Dave Hughes to shamelessly name drop a few), tamed a shed full of drunk miners, kept a 17 year marriage off the rocks and is currently being parented by her five year old. She tackles relationships, observations and random events with equal passion and her unique storytelling ability takes her audience along with her for the ride. Kat has been a professional improviser since 1993, hosted Gala Events and worked a crowd from the back of a cattle truck. She can be heard regularly across Queensland ABC radio and has headlined the best clubs in Australia and Canada. She is also the co-producer of the highly successful Ladies Comedy Nights in Brisbane and enjoyed sell out seasons of her original show Untidy at the 2012 Brisbane Comedy Festival and husband and wife co-production He Said, She Said (with husband Stav Davidson) at Wonderland Festival and venues around Brisbane since 2016.

Intimate, hilarious comedy shows every Tuesday night as Based Comedy and Young Henry's bring the best performers to the Scottish Prince from around the country and around the world. Book your spot right here!

Prefer to book on Open Table..? copy this link into your browser: https://www.opentable.com.au/r/the-scottish-prince-reservations-palm-beach?restref=51107&lang=en-AU&ot_source=Restaurant%20website

Tickets are $20 + booking fee, and include a house beer, house wine, house spirit or soft drink upon arrival. Get in early so you can get your dinner ordered before the show starts!

*This voucher is only valid on the night of the performance it was purchased for. This is not redeemable for cash. This ticket is non-refundable.

If you would like to sit with friends, please purchase your tickets together.

Tickets for Tuesday Night Comedy! can be booked here.

The Scottish Prince
Follow Contact
About The Host: Named after the Gold Coast whisky wreck of the same name, this restaurant and whisky bar pays homage to a bygone era.
Website Link: thescottishprince.com.au
Are you the host?
Nearby Hotels The Scottish Prince, 1176 Gold Coast Highway, Palm Beach, Australia
Event details from Eventbrite Report a problem ?