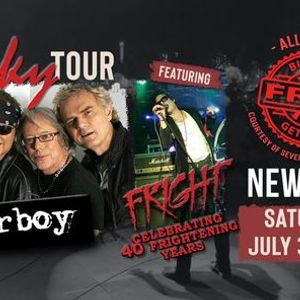 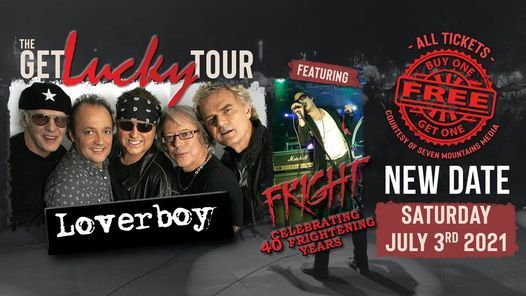 The Get Lucky Tour
featuring Loverboy, with special guests
Fright “Celebrating 40 Frightening Years” and The Ampersand Project,
coming to Tag’s Summer Stage.
BIG FLATS, NY- The Budweiser Summer Stage at Tag’s welcomes The Get Lucky Tour: Loverboy with special guests Fright RESCHEDULED TO Saturday, July 3rd 2021
Tickets on sale NOW and are available for purchase online at Tagstickets.com, by phone 800-650-TAGS or in person at Tag’s Restaurant in Big Flats.
All tickets are BUY ONE GET ONE FREE! Courtesy of Seven Mountains Media and:
Wink 106 • Wingz 93 • WOGA 92.3 • Cool 104.9 • 101 The Met • Big Foot Country 103.1

Loverboy:
For more than 30 years, LOVERBOY has been “Working for the Weekend” (and on weekends), delighting audiences around the world since forming in 1978, when vocalist Mike Reno was introduced to guitar hot shot Paul Dean. LOVERBOY’s reputation as a live act which has always been its calling card, as the group continues to entertain fans of all ages, amazing even Mike Reno.
Perhaps the band’s most famous song is “Working for the Weekend,” which has fueled a generation’s dreams of toiling every day for the chance to celebrate come Friday night. Dean realizes it has taken on a whole new meaning these days.
“You’re lucky if you can work for the weekend now,” he says. “We’re all fortunate to be doing that. My personal dream has always been to play guitar and entertain people,” he enthuses. “There’s no feeling like looking out in the audience and seeing them grinning ear to ear, everyone on the same wavelength. And once we start with the mega-hits, the place goes crazy. That’s why we do what we do and will continue.”
Fright: Hair Raising Rock n’ Roll • 40th Anniversary. 1980-2020
The summer of 1980 Billy Hilfiger had just come home from touring with his band Glasshead. He approached his younger brother Andy and an old friend, Michael Houghton and asked if they wanted to start a new Band ? Michael and Andy were then in a hot regional band called Vaudeville and of course they joined forces. The result…Fright. The original line up was Billy H on guitar, Michael H on vocals, Andy H bass and two other neighborhood friends, Fred Fieno on guitar and Augie Spaz, drums. Fright became instantly popular in Upstate New York State as well as New York City. Fright won a local Battle of the Bands in Horseheads, NY, received a recording deal and released a single called The Trap, with Demons Call as the B side. The songs gathered airplay throughout the area. Fright also performed at the iconic CBGB’s on New York’s Lower East Side as well as Great Gildersleeves in the Bowery.
Later on, Augie left the band and was replaced by drummer Jimmy Cacala, formerly of Vaudeville. Eventually Billy moved to NYC with brother Tommy Hilfiger. The band decided to keep Fright alive and hired Mark Dewey, a young guitarist with a great new sound. Andy and Michael also relocated to NYC as Jimmy commuted back and forth for shows. Mark later moved to Los Angeles and Fright changed the name to Hilfire. This new line-up did several shows and recordings until 2001 when Billy passed away from brain cancer.
Fright returned, now with Rob Cannavino on guitar and did several shows throughout the rest decade opening for many national acts. Fright reunited with Mark Dewey October 2019 for a reunion show and is now preparing for shows in 2020 with Michael H, Jimmy, Andy, Bill Cristofaro on bass and Derrick Hawkins formerly of the Ace Frehley Band.
Frights Mission has stayed the same from day one…
High Energy Rock n Roll…Hair raising Rock n’ Roll
See you on the Road..
The Get Lucky Tour: Saturday, July 3rd 2021 - Tickets on sale NOW - Tickets available for purchase online at Tagstickets.com, by phone 800-650-TAGS or in person at Tag’s Restaurant in Big Flats.
607-562-7683 - fax 607-562-3412 – e-mail – aW5mbyB8IHRhZ3N0aWNrZXRzICEgY29t

You may also like the following events from US lovely music: