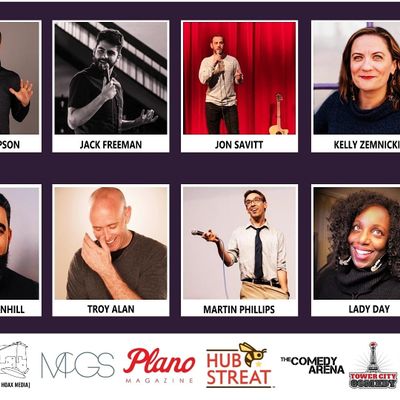 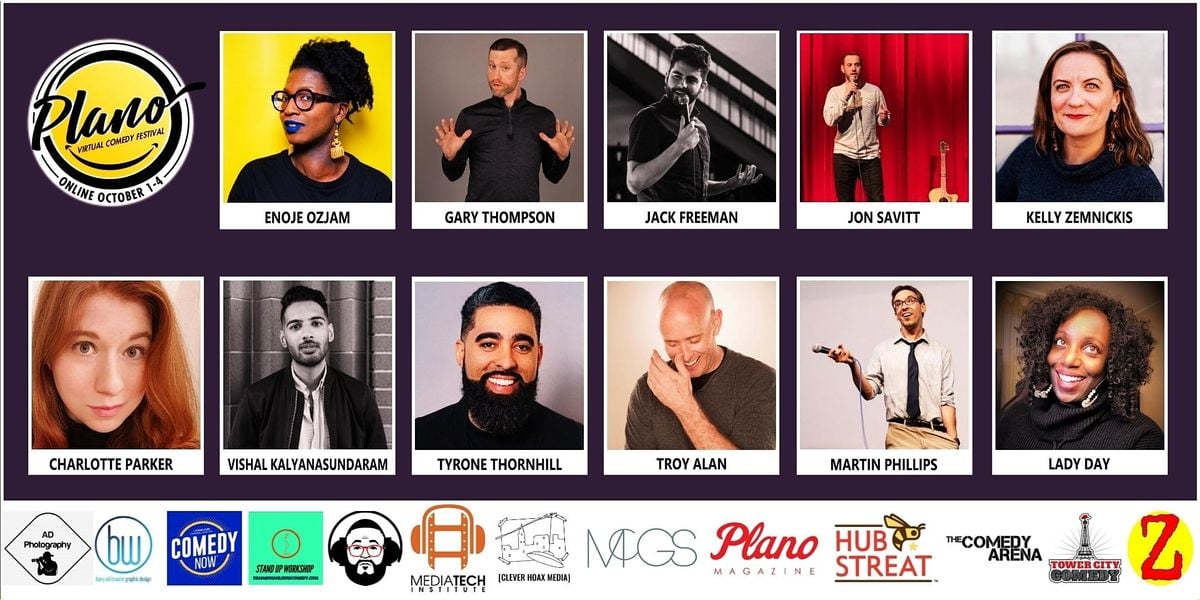 The Plano Virtual Comedy Festival is proud to present some of the hottest nationally touring and up and coming stand-up comics from around the world.

This show is rated M for Mature audiences and may not be suitable for children under the age of 16.

Charlotte Parker is a DFW-based comedian who has performed all over the metroplex, including Stomping Ground Comedy, Addison Improv, Hyena's Fort Worth, and Pocket Sandwich Theatre. Since the quarantine began, she has traversed the internet to do stand-up in virtual venues based all over the US. She performs regularly at The Blue Mic, Open Mic Mondays, Comedy Away from the Wench, Suddenly Standup, and the PandeMic, to name a few. Charlotte is teaming up with David Parsons to premier a Dallas-based online open mic in association with Rampantly.la in September 2020.

Troy Alan is a comedian/actor/writer based in Brooklyn, NY. He's performed at almost all of the major clubs in NYC, toured Canada, the American South, some in Europe, and last year, he had a one-man comedy/story-telling show in the Edinburgh Fringe Festival. Should we ever be allowed to congregate inside again, he will be appearing on Gotham Live on AXS TV. Troy has been featured in Time Out NY's Joke of the Week, Laughs on Fox, the Laughing Devil Festival, Hoboken Comedy Festival, Trial By Laughter, Portland Maine Comedy Festival, the London World-Wide Comedy Short Film Festival, and the New York City Independent Film Festival.

Vishal Kalyanasundaram is up-and-coming Bay Area comedian whose lovable brand of goofball comedy is sure to make you just as confused as he is about the world. He has performed at clubs and festivals across the country.

Tyrone Thornhill has been seen on stages across the country, including The Stand NYC, Jimmy Kimmel’s Comedy Club, Laffaholics Live, the Orlando Improv, and more! Growing up Biracial in America has given Tyrone a unique perspective that is accessible to all audiences.

A former spoken word artist, enoje OzJam has performed in shows including Black Like She, Shade Toronto, Bankrupt and Bougie, and Dat Gyal Funny. Global pandemics don't stop no show! With her production project "But Is She Funny," enoje has recently coordinated the April Fools: Bun and Cheese online edition and the Laugh aLong Weekend Comedy Show. She has also co-produced the Bag of Foolishness comedy series, Jingle Jokes and Vibes, and Feelings: the Emotional Open Mic.

Lady Day is a fresh new face in comedy. After years of having stand-up on her bucket list, she finally took the plunge last year and was instantly hooked. She's performed at several comedy shows and inserts humor wherever she can. Lady Day's perspective, "it's better to laugh than cry" is the foundation for her comedy. She brings humor to her audience through stories that anyone can relate to, especially when it comes to dating and relationships. Separate from her day job, in her spare time, Lady Day is a motivational speaker. Applying her funny bone to speaking, Lady Day is known in the speaking world by her name, Natasha Halliday, where she speaks on using humor to build resilience.

Jon Savitt is a writer and comedian featured in places like Funny or Die, College Humor, Washington Post, NBC News, and more. He’s also a past contributor to the comedy series “Good Mythical Morning”.

Gary Thompson is a radio DJ and comedian from Tulsa Oklahoma. He's been seen on stages from Atlanta to Vegas. He's also performed on them.

Kelly Zemnickis is a Toronto-based stand-up comic, writer, & producer. She started her stand-up career at the tender age of 37 and has since become a regular on the stages of Toronto, Montreal and New York City! Kelly is also a freelance writer, with her work appearing in Hello Giggles, Chatelaine and Metro UK. Her documentary No Responders Left Behind (co-produced with Paradox Pictures), highlights the increasing and troubling health issues of 9/11 first responders and is currently in post-production. Kelly has been spotted talking gossip on the webseries TMZ Live and just feels ridiculously lucky that she gets to do all these things. Kelly will be a featured guest as part of the upcoming 2020 Burbank Comedy Festival.

Jack Freeman is a comedian and writer from Dallas, TX. He appeared at the 2019 Plano Comedy Festival and the 2020 LaughFest in Grand Rapids, Michigan. In normal times, he's a weekly performer at Backdoor Comedy in Richardson, TX.

Martin Phillips is a stand-up comedian primarily based in Washington DC, but still travels all over the country and has even performed in Alaska! While in college, Martin was named the funniest college student in DC and hasn't stopped since; from performing at festivals, like The LA Diversity in Comedy Festival to the Cleveland Comedy Festival, and performing at colleges, appearing on the K*ll Tony podcast multiple times, corporate gigs, apartment shows - Martin does it all! Be sure to check out where he'll be next or contact him if interested!

1. All festival shows and events will be hosted via the Zoom platform. If you are a first time Zoom user, please download the app on your device at least a few hours or more prior to the show start time, and ensure that your computer, tablet, or mobile device has a stable internet connection. A device restart may help to improve performance, if you are experiencing connectivity issues.

2. Do not share your Zoom link with anyone. It’s unique to you. Both attendees will be locked out of the show, if more than one person tries to access the Zoom link.

3. No heckling. Please be respectful of all performers, festival volunteers, and audience members. Any disrespectful, disruptive, or inappropriate behavior will not be tolerated. You will be removed from the show.

4. We love to hear you laugh! Find a quiet space with no background noise or distractions to watch the show. Turn your mic on and reduce the volume. Ringing phones, dogs barking, kids screaming, etc. are disruptive to the show. If you can’t break free from background noise, please mute your mic.

5. Please plug headphones into your device, if you plan to keep your mic on. Listening to audio on a speaker phone or external speakers with a mic on may cause feedback.

6. Turn on your video so that we can see your face during the show. If you prefer to keep your video off, that’s cool.

By purchasing a ticket, you consent to the following:

1. The Plano Comedy Festival will video record and photograph certain portions of the show that may include audience members. If you do not consent to being video recorded or photographed, you can simply switch off your video.

2. The Plano Comedy Festival is providing a performance event independent from Zoom technology and is not responsible for any issues caused by Zoom. Please contact the Zoom Support Help Center for any issues related to the technology.

The Plano Virtual Comedy Festival (PCF 2.5) is a laughter-filled 4 days of comedy events you can attend right from the comfort of your laptop, desktop, or mobile phone! From October 1st-4th, the virtual festival will feature over 100 of the funniest nationally touring and up and coming comics from around the world!

The Plano Comedy Festival is a 501c3 non-profit comedic arts festival. Our mission is to enrich the City of Plano, surrounding communities, and our virtual audiences with the comedic arts.

Stay up to date with the latest information about the Plano Virtual Comedy Festival such as the 2020 festival lineup, tickets, schedule, photos and more via the official Plano Comedy Festival website https://planocomedyfestival.com.

We at the Plano Comedy Festival hope all our fans, our performer friends, and our communities are staying safe during these unprecedented times. 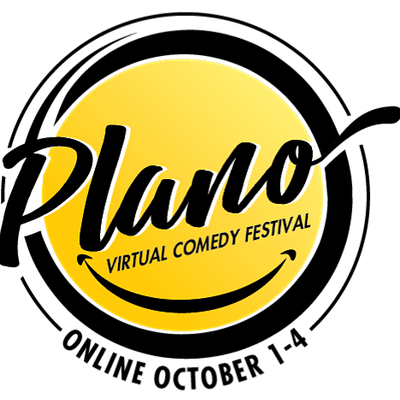 Plano Comedy Festival
Follow Contact
About The Host: Plano Comedy Festival Goes VIRTUAL!Plano Virtual Comedy Festival (PCF 2.5) is a weekend of comedy events you can attend right from the comfort of your laptop, desktop, or mobile phone! From October 1st-4th, the virtual festival will feature over 100 of the funniest nationally touring and up and coming comics from all over the country and internationally. We at Plano Comedy Festival hope all our fans, our performer friends and our communities are staying safe during these unprecedented times. We hope to see you virtually. The Plano Comedy Festival is a 501c3 non-profit comedic arts festival. Our mission is to enrich the City of Plano, surrounding communities, and our virtual audience with the comedic arts.
Website Link: http://www.planocomedyfestival.com
Advertisement
Event details from Eventbrite Report a problem ?