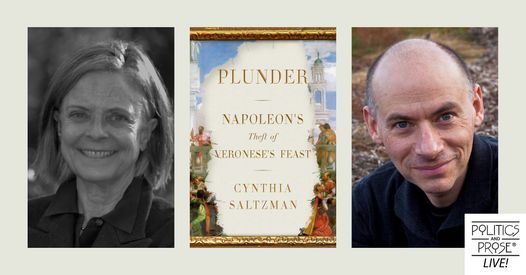 Cynthia Saltzman's Plunder recounts the fate of Paolo Veronese's Wedding Feast at Cana, a vast, sublime canvas that the French, under the command of the young Napoleon Bonaparte, tore from a wall of the monastery of San Giorgio Maggiore, on an island in Venice, in 1797. Painted in 1563 during the Renaissance, the picture was immediately hailed as a masterpiece. Veronese had filled the scene with some 130 figures, lavishing color on the canvas to build the illusion that the viewers' space opened onto a biblical banquet taking place on a terrace in sixteenth-century Venice. Once pulled from the wall, the Venetian canvas crossed the Mediterranean rolled on a cylinder; soon after, artworks commandeered from Venice and Rome were triumphantly brought into Paris. In 1801, the Veronese went on exhibition at the Louvre, the new public art museum founded during the Revolution in the former palace of the French kings.

As Saltzman tells the larger story of Napoleon's looting of Italian art and its role in the creation of the Louvre, she reveals the contradictions of his character: his thirst for greatness--to carry forward the finest aspects of civilization--and his ruthlessness in getting whatever he sought. After Napoleon's 1815 defeat at Waterloo, the Duke of Wellington and the Allies forced the French to return many of the Louvre's plundered paintings and sculptures. Nevertheless, The Wedding Feast at Cana remains in Paris to this day, hanging directly across from the Mona Lisa.

Cynthia Saltzman is the author of Portrait of Dr. Gachet: The Story of a Van Gogh Masterpiece and Old Masters, New World: America's Raid on Europe's Great Pictures. A former reporter for Forbes and The Wall Street Journal, she is the recipient of a fellowship from the Guggenheim Foundation and has degrees in art history from Harvard and the University of California at Berkeley. She lives in Brooklyn, New York,

Blake Gopnik, one of North America's leading arts writers, has served as art and design critic at Newsweek, and as chief art critic at the Washington Post and Canada's Globe and Mail. In 2017, he was a Cullman Center Fellow in residence at the New York Public Library, and in 2015 he held a fellowship at the Leon Levy Center for Biography at City University of New York. He has a PhD in art history from Oxford University and is a regular contributor to the New York Times.