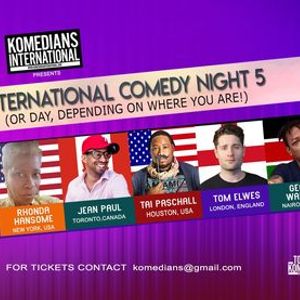 International Comedy Night 5 (Or Day, Depending On Where You Are!) 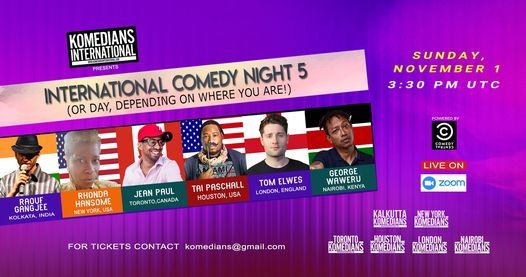 International Comedy Night 5 (Or Day, Depending On Where You Are!)

INTERNATIONAL COMEDY NIGHT 5
(OR DAY, DEPENDING ON WHERE YOU ARE!)

Standup comedians from around the world bring you an evening of international hilarity; including Rhonda Hansome from New York, an award-winning comedian who has appeared on Saturday Night Live; Jean Paul from Toronto, a Caribbean-Canadian who has performed extensively worldwide; Tai Paschall from Houston, who now performs regularly throughout the Middle East; Tom Elwes from London, one of the newest comics to break through on the circuit; George Waweru from Nairobi, a lighthearted Kenyan comedian and writer; with the show being hosted by Indo-German wordplay wizard Raouf Gangjee. Prepare to hold your sides and shake your belly at some world-class wit.