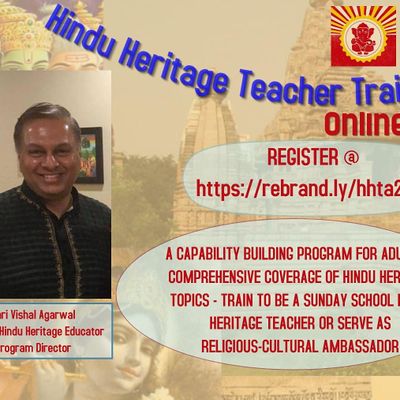 GET TRAINED TO BECOME A TEACHER AND AMBASSADOR OF HINDU HERITAGE

This is a year long training program for parents, sunday school teachers and other adults. The participants will gain competencies in teaching Hindu heritage topics in Sunday Schools and representing Hindu culture in public spaces as cultural ambassadors.

The program is offered free of cost.

Participants are expected to put in the required effort in learning the materials presented, and further their research and knowledge acquisition to be able to present Hindu culture in public spaces, in addition to teaching students and youth at weekend classes at Hindu temples, or any other informal setting.

The program is primarily designed for parent-volunteers who teach weekend / Sunday classes at Hindu temples. Also, the same competencies are required by activists and community leaders who represent and express on Hindu Dharma in public spaces including journalists, columnists, videographers, bloggers, commentators and other writers.

Anyone can attend who needs to acquire teaching and presenting capability in Hindu Dharma topics.

BACKGROUND / WHY THIS PROGRAM

There are well over 1000 Hindu temples in the U.S. and each one of them run some kind of a Weekend/Sunday school. Most often parents of children studying in these schools volunteer to teach. The volunteer-teachers lack the knowledge base and skills to teach these classes. There is a lack of structured training program for the volunteer-teachers in this space. Similarly those who represent Hindu culture in public spaces have the same knowledge deficit. This program is developed to meet the challenge of providing structured training in Hindu Heritage topics.

Shri Vishal Agarwal is a veteran Hindu Heritage expert, researcher, columnist, editor, author and teacher. He is the author-editor of "The New Stereotypes Of Hindus In Western Indology" (listed on Amazon), a critical review of western scholarship on Hindus and Hinduism. He has developed and implemented a comprehensive program in Study of Hindu Dharma at his local Hindu temple. The curriculum and classes developed by him are being extensively used by many Hindu temples in the U.S.

The year long training program will cover the following topics

Also check out other Workshops in Online, Virtual Events in Online.