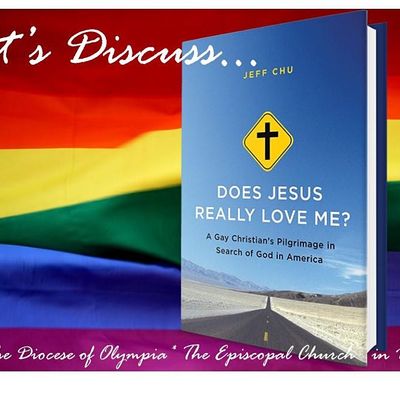 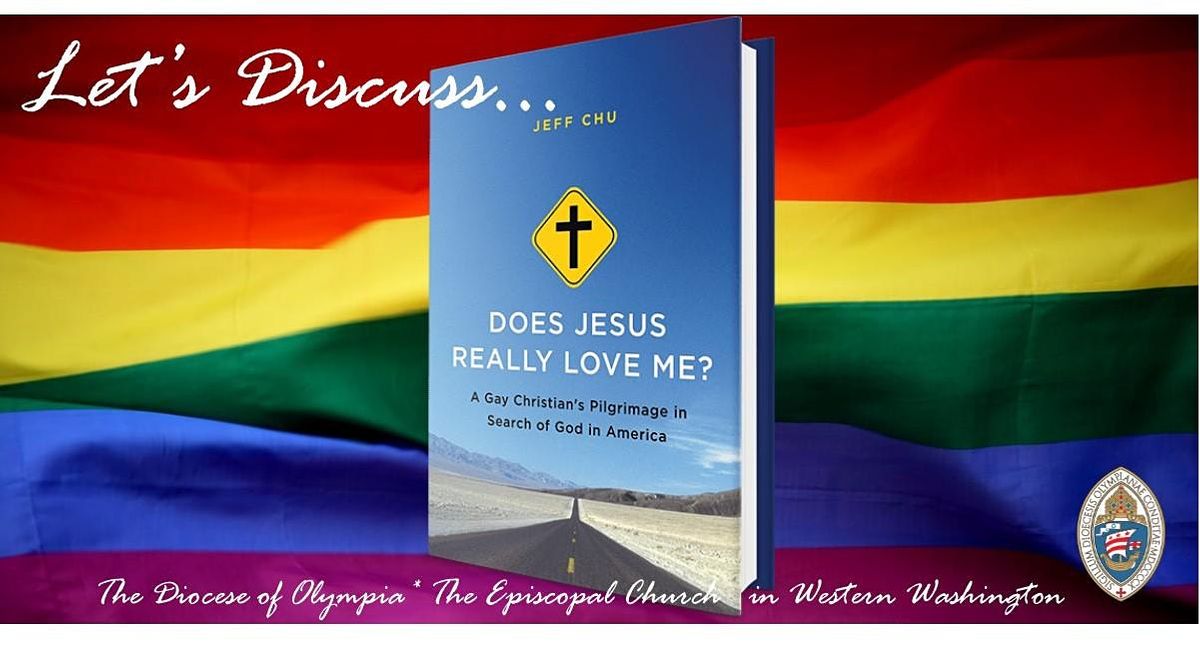 Join us for a monthly discussion of Does Jesus Really Love Me? A Gay Christian's Pilgrimage in Search of God in America, by Jeff Chu.

You’re invited to a monthly book discussion of Does Jesus Really Love Me? A Gay Christian’s Pilgrimage in Search of God in America, written by Jeff Chu.

The book “captures spiritual snapshots” of Christian America: from the fundamentalist Westboro Baptist Church, to the pioneering Episcopalian bishop Mary Glasspool—who proclaims a message of liberation and divine love. When it was published, it earned the cover of the New York Times Book Review where it was described as a “fascinating, thoughtful, and important book [that] deserves to be widely read.”

Library Journal said in its starred review that Does Jesus Really Love Me? is "poignant, at times painful, and spiced with wry humor, this is a must-read for LGBT people on their own spiritual journeys or anyone interested in reconciling religion with sexuality."

All are welcome to join the conversation! We hope that this time together will be a starting place for LGBTQ+ folks in the diocese to connect and build relationship for mutual support.

And we hope that non-LGBTQ+ folks consider joining as way to deepen their commitment to allyship. Over this 5-session study, we’ll explore how our own stories share similarities or differ from Jeff’s and from one another. And we hope that the relationships we build through this study will be a catalyst for mutual care, prayer, support, and action from LGBTQ+ Episcopalians, and their allies, in Western Washington.

How do I get the book?

If you don’t have it already, the Diocese of Olympia is happy to provide you with a paperback copy of the book for the discounted amount of $10. In tickets, please select "Series Participant - Please Send Me the Book," and then you have the option of paying by credit card or check. Make sure to provide an accurate mailing address and contact phone number when prompted.

Jeff Chu is an investigative journalist whose experience of reconciling his sexuality as a gay man and his faith as a Christian led him to explore the same intersection across the Christian landscape in America. That quest became the book: Does Jesus Really Love Me? A Gay Christian's Pilgrimage in Search of God in America, which earned rave reviews and the cover of the New York Times Book Review when it was published in 2013.

Jeff is the co-curator and co-host, with Sarah Bessey, of Evolving Faith, a conference, founded by the late Rachel Held Evans, that drew over 7,000 people from all over the globe to its virtual iteration in October 2020, including an enthusiastic contingent from the Diocese of Olympia.

In March of this year, Jeff was a featured speaker at Better Together, the annual Diocesan Faith Formation Mini-Conference. You can watch his powerful presentation here. Prior to that he sat down with Presiding Bishop Michael Curry to discuss "Rest and Restoration" on the PB's "Way of Love" podcast. You can listen to that delightful and thought-provoking conversation here.

A graduate of Princeton University, the London School of Economics, and Princeton Theological Seminary, Jeff's writing has also appeared in The New York Times Magazine, the Wall Street Journal, and the Washington Post. He was on the launch team of the Conde Nast Portfolio, and before that, spent seven years at Time, where he received his journalistic education. He was a London-based web producer and staff writer—his first cover story was on Britney Spears and her Swedish songwriter, Max Martin—and then a New York-based writer and editor.

Today he is the editor-at-large at Travel+Leisure, an occasional preacher, and teacher in residence at Crosspointe Church. He lives in Michigan with his husband and dog, Fozzie.

About his faith, Jeff says:

"I feel most at home reporting on religion (though my book was my first—and probably only—major project on faith and sexuality, because wow, the emails you get when you write on this stuff). My life has been ecclesiastically promiscuous. My grandpa was a Baptist preacher, my uncle still is one, and my family is full of Sunday-school teachers, church pianists, deacons, and the like. My high school was allegedly nondenom, but its roots were Christian Reformed (many of the teachers went to Calvin); we had some zany Bible classes.

"During my childhood, my family attended Baptist and PCA churches. In college, I did the nondenom/evangelical thing. In grad school and afterward, I went Anglican (I lived in England, so it seemed locally appropriate) and then stopped doing church altogether. Today, I call the Reformed Church in America home. I was ordained an elder at Old First Reformed Church in Brooklyn, N.Y., and I’m a candidate for ministerial ordination in the RCA’s Rockland-Westchester Classis. Some days, I believe in God; other days, I want to believe in God. "

The Rev. Nat Johnson is Curate at St. Paul's Episcopal Church, Seattle, where their responsibilites are Christian formation for all ages, supporting the parish’s Daily Office ministry through presence and teaching, and sharing the work of preaching, presiding, and pastoral care.

The Rev. Joseph Peters-Mathews is the vicar of St. Hilda- St. Patrick Episcopal Church in Edmonds. He and his husband Brandon live in Seattle with their son Topher and cat Margaret Diana ("Maggie"). Joseph is a soccer referee, Shape Note singer, and Strict Scrutiny Podcast superfan. He's on Twitter and Instagram as @JosephPMathews.

You may also like the following events from The Episcopal Diocese of Olympia:

Tickets for Does Jesus Really Love Me? Book Discussion can be booked here.

The Episcopal Diocese of Olympia
Follow Contact
About The Host: The Episcopal Church in Western Washington
Website Link: http://www.ecww.org
Are you the host?
Advertisement
Event details from Eventbrite Report a problem ?