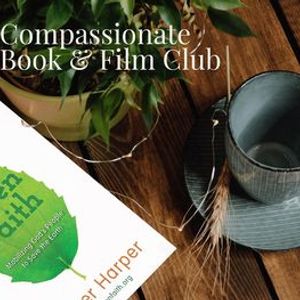 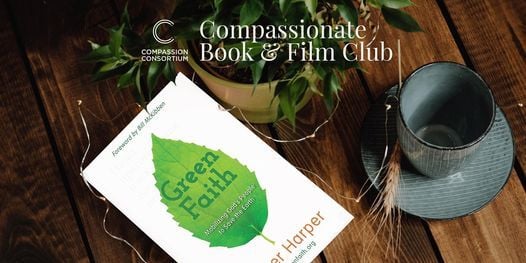 Book talk: Green Faith's Fletcher Harper shares how belief and practice combined with science and faith can help sustain us & the planet.

Join the Compassion Consortium at 8:00 p.m. Eastern Time on May 11, 2021 as Fletcher Harper shares his book and answers questions about how we can help the planet survive & thrive.

Get your copy to preread at:
Bookshop | Amazon | B&N
About the book:
God is calling us to live differently. The challenges we face are imminent. GreenFaith provides vision, inspiration, and practical tools to help you build your faith while inhabiting a creation that is at risk. With honesty and candor, Fletcher Harper shows that it takes belief and practice, science and faith to sustain us and our planet.
The book gives concrete examples and tips that will help people of faith and worshiping communities engage in Earth care—in bold, life-giving ways. Each chapter has questions to guide personal study and group conversation.
All bets are off if we go over the climate change cliff—a disaster greater than many Hurricane Sandys. There is no doubt that climate change is happening. While debated for years and despite some media reports to the contrary, the majority of people are ready to take action to avoid calamity. But what action is advisable or even possible? What can ordinary people do in the face of such staggering problems? Can or should faith communities play a part?
Fletcher Harper shows how we can make a difference and make Earth a better world for all of us.


The Rev. Fletcher Harper is an Episcopal priest and the Executive Director of GreenFaith, a global multi-faith climate and environmental justice network.

An internationally recognized author, speaker, and pioneer of the worldwide religious environmental movement, he has been a leading voice in the faith community’s response to the climate crisis for the last two decades. He has worked with diverse faith leaders around the world, including His Holiness the Dalai Lama, Archbishop Desmond Tutu, and former United Nation’s Secretary General Ban Ki Moon.

Rev. Harper is the co-founder of Shine, an international campaign that brings together bold innovators to overcome the threat of entrenched poverty and climate change, and to achieve universal access to affordable and reliable energy.

He spearheads the faith-based fossil fuel divestment movement around the world, is one of the faith leaders of the People's Climate Marches, and plays a leading role in the Interfaith Rainforest Initiative, a campaign organizing religious communities to fight tropical deforestation and protect Indigenous Peoples’ rights.
About the Compassion Consortium:
The Compassion Consortium is a non-sectarian spiritual community that is interfaith, interspiritual, and interspecies. We offer monthly services, book and film clubs, fellowship, and resources for vegans, vegetarians, animal rights activists, and all humans who care about and advocate for animals and the planet. compassionconsortium.org