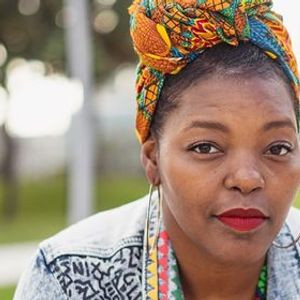 Join hosts Mahogany L. Browne and Jive Poetic for the Brooklyn Poetry Slam, back in the virtual space and coming to your computer screen via Zoom!

The Brooklyn Poetry Slam is excited to announce the return of its monthly programming this Fall. Mark your calendars now, and join special guests and featured poets from all over the world, as Mahogany L. Browne hosts and cultivates an incredible evening of poetry and community, supported by beats from Jive Poetic. Featured poet to be announced.

Don't miss a chance to speak out and be heard! Sign ups for the Slam and for the Open Mic happen the night of the event in the Zoom room, so don't be late!

Mahogany L. Browne is the Executive Director of JustMedia, a media literacy initiative designed to support the groundwork of criminal justice leaders and community members. This position is informed by her career as a writer, organizer, & educator. Browne has received fellowships from Agnes Gund, Air Serenbe, Cave Canem, Poets House, Mellon Research & Rauschenberg. She is the author of recent works: Chlorine Sky, Woke: A Young Poets Call to Justice, Woke Baby, & Black Girl Magic. As the founder of the diverse lit initiative, Woke Baby Book Fair. Browne's latest project is a poetry collection responding to the impact of mass incarceration on women and children: I Remember Death By Its Proximity to What I Love (Haymarket Books), She lives in Brooklyn, NY.

Jive Poetic is a writer, organizer, and educator based in Brooklyn, New York. He received his BA in Media Studies from the State University of New York at Buffalo, and his MFA in Writing and Activism from Pratt Institute. In 2017 Jive was the first recipient of the John Morning Award for Art and Service. He is the founder of Insurgent Poets Society, Carnival Slam: Cultural Exchange, and co-founder of the Brooklyn Poetry Slam. His work has been showcased on season four of TVONE’s Lexus Verses and Flow, PBS NewsHour, and BET. International recognition and support for his work has come from the British Arts Council; US Embassies in Australia, Brazil, and Poland; and the Minister Of Culture in Antigua and Barbuda. He has received fellowships from Air Serenbe and Rhode Island Writers Colony, and when he is not on tour or hosting, he teaches poetry and hip hop workshops to at risk youth in New York City and the surrounding area.

You may also like the following events from BRIC:

Tickets for Brooklyn Poetry Slam | Feb 22 can be booked here.