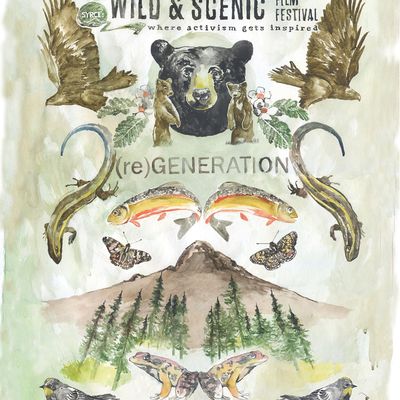 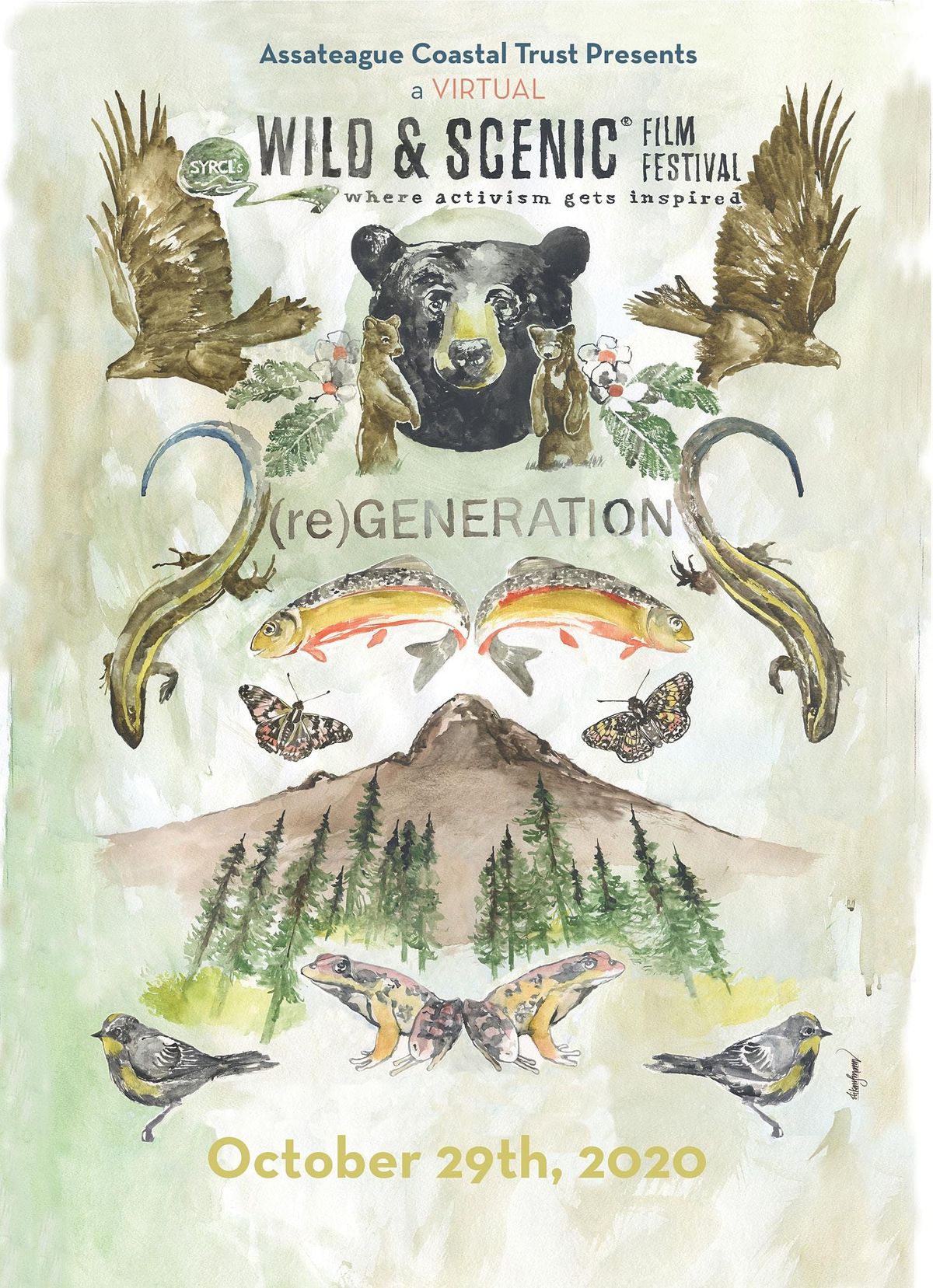 Assateague Coastal Trust is pleased to announce that we will be hosting our 10th Annual Wild & Scenic Film Festival Thursday, October 29th!

This year's Wild & Scenic Film Festival will be different than years past, as we will bring the entire program online to the comfort of your own home.

Your ticket includes admission to our Virtual Event with Live Chat PLUS(5) Days of On Demand Access!

Make the evening more fun by pre-ordering a boxed Food Special from one of our local sponsors - Seacrets in Ocean City, MD or Shotti's Point Charm City in Baltimore, MD.

Join our Live Chat to interact with our sponsors, staff and other viewers. Raffle Tickets are also available. Multiple baskets from local and national sponsors -winners announced throughout the evening!

OUR EXCITING FILM LINE UP!

Mike Hopkins' epic journey through a magical world comes to an end in the final chapter of the DreamRide trilogy.

Ben Depp, a landscape photographer, has set out to chronicle the wetlands in a series of high-art aerial photographs that he captures with the help of his 21-foot paragliding wing and 200HP motor driven propeller that he straps to his back. From above he has become acutely aware of the vast network of pipeline canals which are reportedly responsible for up to 30% of the land loss. In this episode we take a trip to the barrier islands where Ben flies his glider and observes the recent restoration that the state has put into rebuilding the land in this area.

Every day (and, we mean every day) you can see Daniel riding his bike along Highway 50. And, while he's out there, he's picking up trash and doing his part to make the Lake Tahoe area better for everyone. That is an amazing story in and of itself. But it is even more incredible when you learn that Daniel nearly died as a child from a fall and was in a coma for 8 months, and although he still suffers from traumatic brain injury (TBI), that hasn't stopped him from making a difference.

Runner and advocate Faith E. Briggs used to run through the streets of Brooklyn every morning. Now she's running 150 miles through three National Monuments that lie in the thick of the controversy around United States public lands.

Deep in the emerald cloud forests of Cusuco National Park of Honduras, scientists are on a quest to record the never-before-heard call of the endangered exquisite spike-thumb frog (Plectrohyla exquisita). What ensues is both a delightful portrait of the process of scientific discovery and an inspiring example of the power of sound as a tool for conservation.

Every nine minutes, the weight of a blue whale (300,000 pounds) in plastic makes its way into our ocean. To call attention to this, the Monterey Bay Aquarium built a life-sized replica of a blue whale made of single-use, locally sourced plastic trash. Certified by Guinness World Records, the whale is the largest sculpture of its kind ever built.

Throughout history, people have always been searching for a perfect place. This short film, based on Guaraní mythology (Tierra sin mal), offers another point of view on paradise: what is the real paradise is inside us and lies in the harmony and unity of everything alive?

Suspended in the airy expanse between heaven and Earth, highliners walk a thin, wiggly piece of nylon webbing that's been rigged between two points, very high up. 'Wave Hands Like Clouds' is an ode to finding focus and balance in a moment of exposed vulnerability that leaves the viewer breathless.

Made with no flights, recycled footage, and zero net carbon. Given away for free. Viewed 53 million times, played to the United Nations. This film is a personal and passionate call to arms from Greta Thunberg and George Monbiot to use nature to heal our broken climate.

In 2002, mountain bikers and entrepreneurs Jen Zeuner and Anne Keller moved to Fruita, Colorado, in search of cheap rent, world-class single track, and free time to ride. Over 15 years later, the two unconventional women have helped reshape one of the state’s most conservative towns, uniting the community through advocacy, inclusivity, and damn good pizza.

A raccoon finds a flashlight in the woods.

East Detroit urban beekeepers Tim Paule and Nicole Lindsey are a young couple working to bring diversity to the field of beekeeping and create opportunities for young Detroit natives to overcome adversity. Detroit ranks fourth in the United States for the most vacant housing lots with well over 90,000 empty lots to date. In an effort to address this issue, Detroit Hives has been purchasing vacant lots and converting them into buzzing bee farms. 'Detroit Hives' explores the importance of bringing diversity to beekeeping and rebuilding inner-city communities one hive at a time.

An ode to the athlete who relishes in getting dirty, who chuckles after a long day in the mountains, effortlessly glides through the crystal clear waves and most importantly, is unapologetic in pursuing their love of getting rowdy in adventures. Director Krystle Wright brings this next installment since the wild things never stopped playing.

Fourth-grade students from Palouse Prairie Charter School (PPCS) in Idaho share their experience building Blooming Culture, a canoe that combines European and Indigenous styles. Students and traditional canoe families paddle together to acknowledge the colonization of indigenous peoples and celebrate our hopes for a continued confluence of cultures. Avery Caudill is a PPCS graduate and made this film in his transition from high school to college.

Set a couple of decades from now, 'A Message From the Future With Alexandria Ocasio-Cortez' is a flat-out rejection of the idea that a dystopian future is a forgone conclusion. Instead, it offers a thought experiment: What if we decided not to drive off the climate cliff? What if we chose to radically change course and save both our habitat and ourselves? What if we actually pulled off a Green New Deal? What would the future look like then?

Visceral imagery, emotional score, and a powerful speech by John F. Kennedy underscore a timeless theme: we come from the sea. 'In Your Hands' invites viewers to look inward and rediscover our connection with - and responsibility to - the natural world.

Also check out other Entertainment Events in Online, Trips & Adventurous Activities in Online. 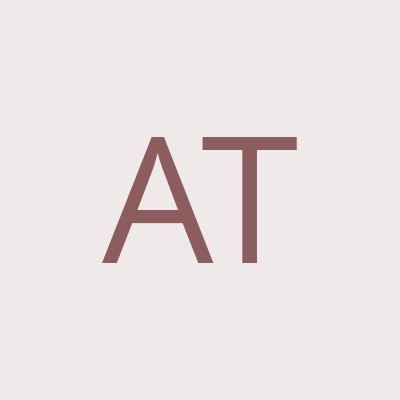