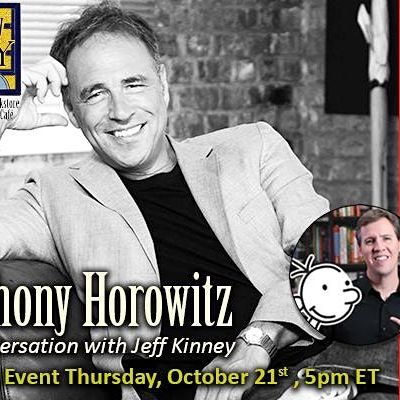 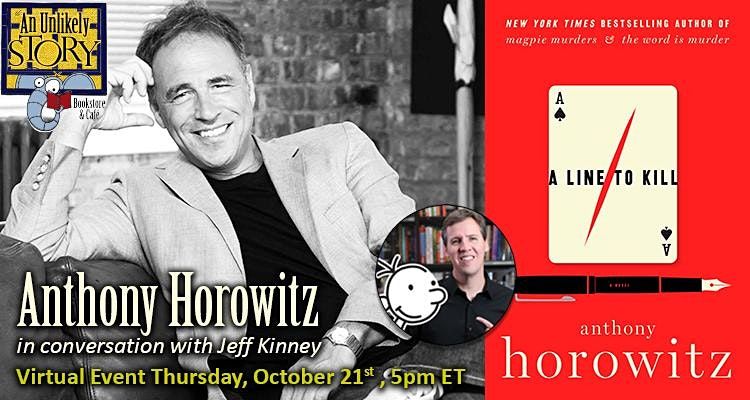 Your ticket includes admission to this exclusive event, a copy of A LINE TO K*ll ($27.99 retail price plus tax) and signed bookplate.

Anthony Horowitz's mysteries are staff favorites, and we're thrilled to welcome him virtually to discuss his newest, A LINE TO K*ll, with Jeff Kinney. The third in Horowitz's bestselling and witty series pays homage to the masters of the Golden Age mystery featuring ex-Detective Inspector Daniel Hawthorne and his sidekick, author "Anthony Horowitz." In this clever locked room mystery, Hawthorne and Horowitz are invited to a very literary festival on an idyllic British island with a murky, haunted past. When one of the authors is murdered, all the writers become suspects resulting in both a hilarious satire of the book world coupled with a first rate whodunit. Anthony will discuss his new novel with Jeff Kinney, the owner of An Unlikely Story and bestselling author of the Diary of a Wimpy Kid series. Following their discussion will be an audience Q & A.

This is a ticketed event. Your ticket includes admission to this exclusive event, a copy of A LINE TO K*ll, and signed bookplate. Please note that this event will take place at 5pm EDT, since Anthony will be joining us from England.

Ticket-holders will be emailed the Crowdcast access info on the day of the event.

Please add DOMESTIC SHIPPING to your ticket if you're not able to pick up your book at An Unlikely Story in Plainville, MA. Your book will not be mailed to you if you don't choose to have it shipped.

The New York Times bestselling author of the brilliantly inventive The Word Is M**der and The Sentence Is Death returns with his third literary whodunit featuring intrepid detectives Hawthorne and Horowitz.

When Ex-Detective Inspector Daniel Hawthorne and his sidekick, author Anthony Horowitz, are invited to an exclusive literary festival on Alderney, an idyllic island off the south coast of England, they don’t expect to find themselves in the middle of M**der investigation—or to be trapped with a cold-blooded killer in a remote place with a murky, haunted past.

Arriving on Alderney, Hawthorne and Horowitz soon meet the festival’s other guests—an eccentric gathering that includes a bestselling children’s author, a French poet, a TV chef turned cookbook author, a blind psychic, and a war historian—along with a group of ornery locals embroiled in an escalating feud over a disruptive power line.

When a local grandee is found dead under mysterious circumstances, Hawthorne and Horowitz become embroiled in the case. The island is locked down, no one is allowed on or off, and it soon becomes horribly clear that a murderer lurks in their midst. But who?

Both a brilliant satire on the world of books and writers and an immensely enjoyable locked-room mystery, A Line to K*ll is a triumph—a riddle of a story full of brilliant misdirection, beautifully set-out clues, and diabolically clever denouements.

One of the UK’s most prolific and successful writers, Anthony Horowitz may have committed more (fictional) murders than any other living author. Two of his previous novels, Magpie Murders and Moonflower Murders, were instant NYT bestsellers. His novel Trigger Mortis (2015) contained original material from Ian Fleming. His most recent Sherlock Holmes novel, Moriarty, is already an industry sensation; its predecessor, The House of Silk, has sold over 450,000 copies worldwide in more than 35 countries. His bestselling Alex Rider series for Young Adults has sold more than 19 million copies worldwide. As a TV screenwriter he created both Midsomer Murders and the BAFTA-winning Foyle’s War on PBS; other TV work includes Poirot and the widely acclaimed mini-series Collision and Injustice. Anthony regularly contributes to a wide variety of national newspapers and magazines, and in January 2014 was awarded an OBE for his services to literature. He lives in London.

You may also like the following events from An Unlikely Story:

Tickets for Anthony Horowitz Virtual Event can be booked here.

An Unlikely Story
Follow Contact
About The Host: An independent bookstore and cafe in Plainville, MA. Be sure to visit for books, specialty gifts, coffee, treats & much more!
Website Link: http://anunlikelystory.com
Are you the host?
Advertisement
Event details from Eventbrite Report a problem ?