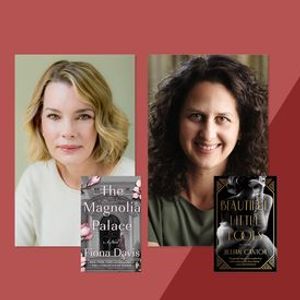 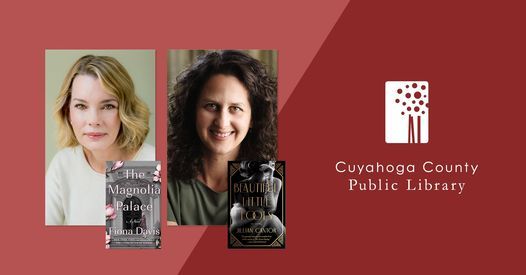 ? This event will be broadcast on Zoom: https://us02web.zoom.us/webinar/register/WN_MYmAjJ7OQXucc817QLpZ4w

Davis is the New York Times best-selling author of several novels, including "The Dollhouse", "The Address", "The Masterpiece", "The Chelsea Girls", "The Lions of Fifth Avenue", and "The Magnolia Palace". She lives in New York City and is a graduate of the College of William & Mary in Virginia and the Columbia Journalism School.

In "The Magnolia Palace", 21-year-old Lillian Carter’s life has completely fallen apart since losing her mother in the Spanish flu outbreak of 1919. For the past six years, under the moniker Angelica, Lillian was one of the most sought-after artists’ models in New York City, but with her mother gone, a grieving Lillian is rudderless and desperate—the work has dried up and a looming scandal has left her entirely without a safe haven. When she stumbles upon an employment opportunity at the Frick mansion—a building that, ironically, bears her own visage—Lillian jumps at the chance. But the longer she works as a private secretary to the imperious and demanding Helen Frick, the daughter and heiress of industrialist and art patron Henry Clay Frick, the deeper she is pulled into a tangled web of romantic trysts, stolen jewels, and family drama that runs so deep, the stakes just may be life or death.

Nearly fifty years later, mod English model Veronica Weber has her own chance to make her career—and with it, earn the money to support her family back home—within the walls of the former Frick residence, now converted into one of New York City’s most impressive museums. But when she—along with a charming intern/budding art curator named Joshua—is dismissed from the Vogue shoot taking place at the Frick Collection, she chances upon a series of hidden messages in the museum: messages that will lead her and Joshua on a hunt that could not only solve Veronica’s financial woes, but could finally reveal the truth behind a decades-old murder in the infamous Frick family.

Cantor has a BA in English from Penn State University and an MFA from the University of Arizona. She is the USA Today and internationally bestselling author of eleven novels for teens and adults, which have been chosen for LibraryReads, Indie Next, Amazon Best of the Month, and have been translated into 13 languages. Jillian’s next historical novel for adults, Beautiful Little Fools, will be published in January 2022. Born and raised in a suburb of Philadelphia, Cantor currently lives in Arizona with her husband and two sons.

On a sultry August day in 1922, Jay Gatsby is shot dead in his West Egg swimming pool. To the police, it appears to be an open-and-shut case of murder/suicide when the body of George Wilson, a local mechanic, is found in the woods nearby.

Then a diamond hairpin is discovered in the bushes by the pool, and three women fall under suspicion. Each holds a key that can unlock the truth to the mysterious life and death of this enigmatic millionaire.

Daisy Buchanan once thought she might marry Gatsby—before her family was torn apart by an unspeakable tragedy that sent her into the arms of the philandering Tom Buchanan.

Jordan Baker, Daisy’s best friend, guards a secret that derailed her promising golf career and threatens to ruin her friendship with Daisy as well.

Catherine McCoy, a suffragette, fights for women’s freedom and independence, and especially for her sister, Myrtle Wilson, who’s trapped in a terrible marriage.

Their stories unfold in the years leading up to that fateful summer of 1922, when all three of their lives are on the brink of unraveling. Each woman is pulled deeper into Jay Gatsby’s romantic obsession, with devastating consequences for all of them.

Cantor revisits the glittering Jazz Age world of F. Scott Fitzgerald’s The Great Gatsby, retelling this timeless American classic from the women’s perspective. Beautiful Little Fools is a quintessential tale of money and power, marriage and friendship, love and desire, and ultimately the murder of a man tormented by the past and driven by a destructive longing that can never be fulfilled.

Tickets for A conversation with Fiona Davis & Jillian Cantor can be booked here.