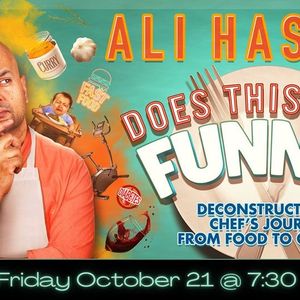 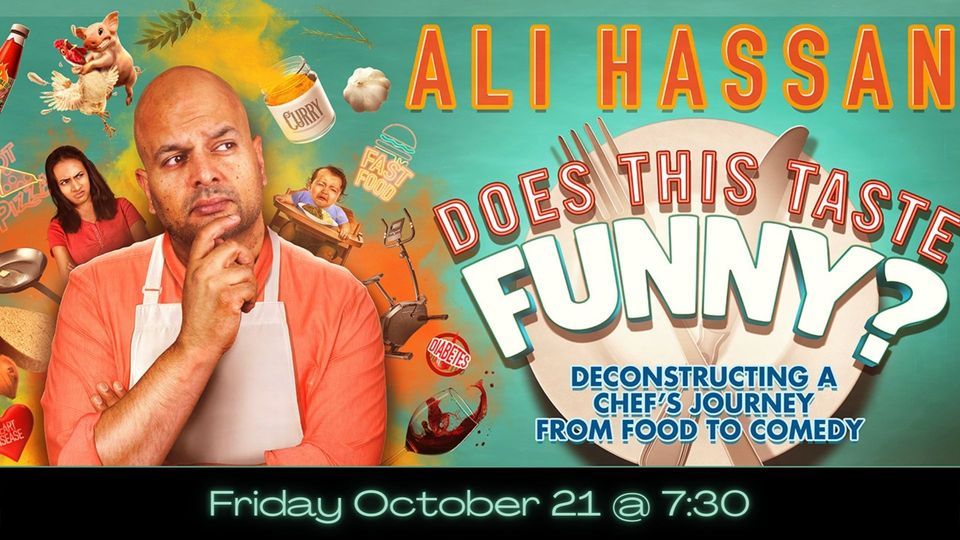 Ali Hassan’s career plans started off as simply as anyone’s: become a chef, get a food show on television, get a second food show on television, be the face of the network and have oven mitts with his face on them. But sometimes things get in the way of your dreams: like your parents’ disappointment, your family of four children and your successful comedy career.

This show is a hilarious exposition of Ali’s journey in and out of the culinary world in which he spent 12 years. Think Eat, Pray, Love....minus the Prayer.

Ali Hassan is a Stand-up Comic and Actor who has performed for audiences across Canada and internationally. He is the host of the CBC Radio stand-up comedy show Laugh Out Loud. Ali is also heard on CBC Radio, NPR and PRX as a frequent guest-host of As It Happens, the arts and culture show ‘q’, and for the past six consecutive years, he has hosted Canada Reads - the annual battle of the books celebrating the best of Canadian literature.

Ali has performed at the Just for Laughs Festival in Montreal and Toronto's JFL42. Ali also toured across Canada as one of the stars of Just For Laughs Comedy Night In Canada tour, hosted By Rick Mercer.

A Canadian Comedy Award nominee, Ali has toured his solo show Muslim Interrupted around Canada to great acclaim. He also took the show to Scotland to perform at the world's largest comedy festival, the Edinburgh Fringe Festival. In 2022, Ali begins touring his latest one man show, based on his decade in the food industry, Does This Taste Funny? In 2022, make sure to check out his book, ‘Is There Bacon in Heaven?’ that comes out with Simon & Schuster.

You may also like the following events from Venables Theatre:

Tickets for Ali Hassan - Does This Taste Funny? can be booked here.

Venables Theatre
Follow Contact
About The Host: With 400 seats and state-of-the-art theatrical equipment, Venables Theatre is the premier performing arts facility of the South Okanagan.
Website Link: http://www.venablestheatre.ca
Are you the host?
Nearby Hotels Venables Theatre, 6100 Gala Street,Oliver,BC,Canada, Oliver, Canada
Report a problem ?