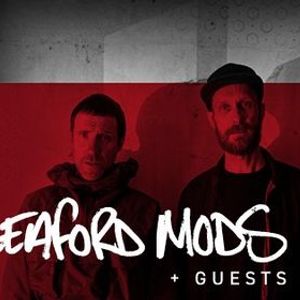 Times like these require a band like Sleaford Mods. Except, of course, there are no other bands like Sleaford Mods. They’re back with new album ‘Spare Ribs’ (out Friday 15 January 2021) and a UK Tour performing in their hometown at the Motorpoint Arena Nottingham on Saturday 27 November 2021.

Spare Ribs - The New Album
Polemical frontman Jason Williamson and dexterous producer Andrew Fearn kick against the pricks with unrivalled bite and wit, railing against hypocrisy, inequality and apathy with their inimitable, scabrous sense of humour. And ‘Spare Ribs’, their astonishing 6h album, featuring Amy Taylor of Melbourne punks Amyl and The Sniffers and the British newcomer Billy Nomates, finds the duo charged with ire at the UK Government’s sense of entitlement, epitomized by its devil-may-care approach to the coronavirus crisis.

In fact, Sleaford Mods are so plugged into the zeitgeist that attention-grabbing new song ‘Shortcummings’ was written five months before shamed political adviser Dominic Cummings embarked on his infamous trip to Barnard Castle. “I could see some things developing; I got quite interested in what he was about,” says Jason, adding that the song deals with “the disorientation being caused by his ideologies”.

‘Spare Ribs’ is the sound of a band so sure of their own sonic terrain that they can now explore its outer regions. The album’s title, Jason says, emerged from “the idea of the amount of people that died from the first wave of coronavirus; human lives are always expendable to the elites… We’re in a constant state of being spare ribs.” Yet Sleaford Mods are an essential part of Britain’s musical anatomy.

You may also like the following events from Motorpoint Arena Nottingham:

Tickets for Sleaford Mods can be booked here.