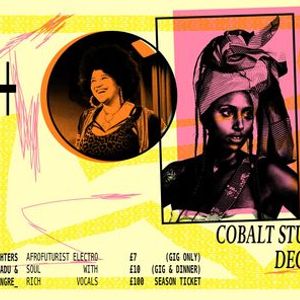 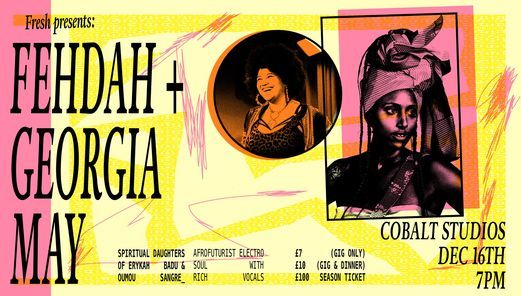 FRESH THURSDAY is a regular event showcasing exciting new music alongside lots of candles, board games and a homecooked slap up dinner.

Spiritual daughters of Erykah Badu & Oumou Sangre. Afrofuturists, electro soul with rich vocals; a thoroughly warming end to our Autumn season and the start of the festive season.

Spiritual daughter of Erykah Badu and Oumou Sangare, Fehdah is a future-afro soul vocalist, producer and multi-instrumentalist, on the frontline of an emerging Irish hiphop and electronic music scene. An eclectic songwriter who draws on her love of Wassoulou music in forging an entirely new take on electro-soul.

“Fehdah is crafting her own genre” – Gal Dem

“Afrofuturist electrosoul worthy of many respins” – The Irish Times

Georgia May is a Soulful vocalist, born and raised in Newcastle upon Tyne with Nigerian roots. Her sound is defined by soothing timbres exposing contrasting emotions of lust and heartache with a poetic lyrical narrative. She's heavily influenced by 90's hip hop, RnB and acoustic soul. Georgia's captivating live vocals are complimented by Daps on keyboards and production, bringing jazzy chords with a gospel influence.

You may also like the following events from Cobalt Studios CIC:

Tickets for FRESH THURSDAY // Fehdah + Georgia May can be booked here.