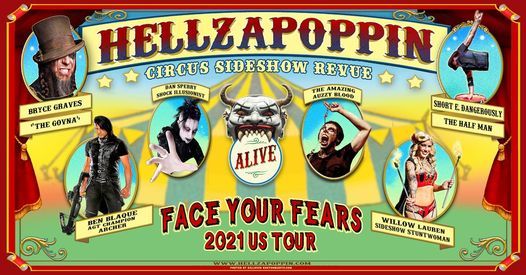 DISCLOSURES: Due to COVID, Hellzapoppin will not be hosting a meet and greet on this tour. If you're not feeling well please stay home. Beware of scams, WARNING do not purchase tickets from anyone that claims they are selling their personal tickets. Purchase only genuine tickets from the Promoter/Venue, www.hellzapoppin.com or directly from the Facebook event page. ENTER AT YOUR OWN RISK! These stunts can be considered extreme to some. Parental guidance suggested. Beware loud music and strobe lights!

I can't wait for you all to see it! I can't begin to tell you how excited I am to introduce my feature performer. His name is Dan Sperry the Anti-conjuror of Magic. This shock illusionist is by far my most favorite magician in the world! He's known as the Rockstar of Magic. Dan has traveled and performed the world over and with some of the most successful magic shows. Dan has appeared on America's Got Talent, Fool US with Penn and Teller, Masters of Illusions, Germany's Das Super Talent and he was the only illusionist awarded the title of “Most Original Magician” on Fox-TV’s “World Magic Awards.”