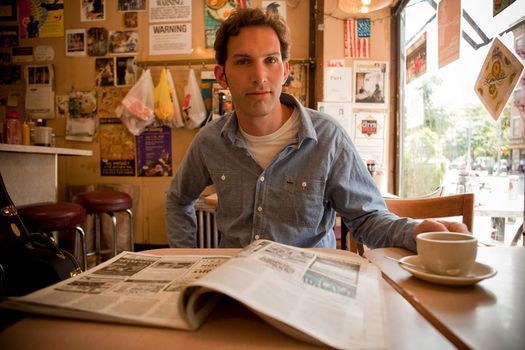 A songwriter’s songwriter, known for his lyric craft, distinctive voice and soulful songs steeped in classic rhythm & blues, pop, jazz, folk and country, Milton first gained notoriety in his hometown New York City when his song “In The City” became a hit on New York’s WFUV radio. His live performances, which include material from every one of his albums, are praised for their wit, humor, and captivating charm.

Milton has toured extensively throughout the states since 2005, as a headliner and appearing as support for his hero and mentor Chris Smither, in addition to shows and tours with Joan Osborne, Steave Earle, Dave Alvin & Jimmie Dale Gilmore, Sonny Landreth, Colin Hay, Kat Edmonson, Josh Ritter and many more.

In late 2019, Milton premiered his 5th and finest album Studio City with a sold out show at City Vineyard NYC. The album, a veritable tour de force of songwriting and studio craft, features 12 ultra-catchy, concise tunes ranging in style from Sinatra-esque full orchestra swing, to Sgt. Pepper-like whimsical comedy to vintage country and New Orleans rhythm and blues. In concert, Milton and his ultra-sharp band of NYC veteran session players deliver the songs seamlessly with Milton’s own graceful live arrangements.

Tickets for The Sunday Buzz Matinee with Milton can be booked here.