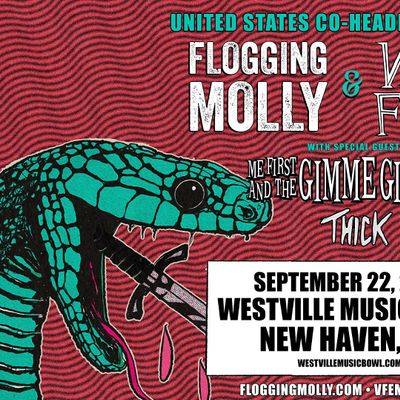 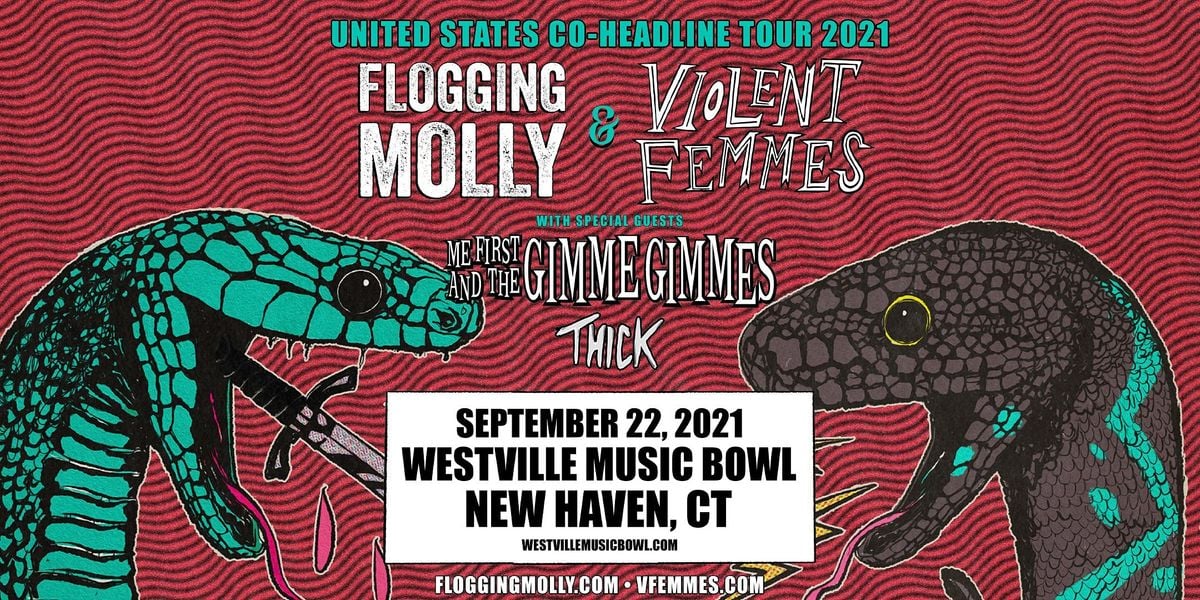 Flogging Molly & Violent Femmes with special guests Me First and the Gimmie Gimmies and Thick at Westville Music Bowl on September 22, 2021

The textbook American cult band of the 1980s, the Violent Femmes captured the essence of teen angst with remarkable precision; raw and jittery, the trio's music found little commercial success but nonetheless emerged as the soundtrack for the lives of troubled adolescents the world over. Their self-titled 1983 debut was a blueprint for legions of sardonic alternative rockers that would follow, and they continued their blend of searing, darkly humorous lyrics and sharp-edged folk-rock on other standout albums like 1991's Why Do Birds Sing?

The Violent Femmes formed in Milwaukee, Wisconsin, in the early '80s, made up of singer/guitarist Gordon Gano, bassist Brian Ritchie, and percussionist Victor DeLorenzo. After being discovered by the Pretenders' James Honeyman-Scott while they were busking on the street, the band signed to Slash and issued their self-titled debut, a melodic folk-punk collection which struck an obvious chord with young listeners who felt a strong connection to bitter, frustrated songs like "Blister in the Sun," "Kiss Off," and "Add It Up." Though never a chart hit, the album remained a rite of passage for succeeding generations of teen outsiders, and after close to a decade in release, it finally achieved platinum status.

ME FIRST AND THE GIMMIE GIMMIES

For the uninitiated, Me First and the Gimme Gimmes consist of Joey Cape (Lagwagon) on guitar, Chris Shiflett (Foo Fighters) on lead guitar, Dave Raun (Lagwagon) on the drums, Fat Wreck-head-honcho/NOFX main-dude Fat Mike, and rounded out by the incomparable crooner, Spike Slawson. Together, Me First and the Gimme Gimmes are an outfit that has always operated more like a beer-hall Pussycat Dolls than a regular mortal band.

When duty calls for one of the Gimmes to perform with their other band, rest assured a traveling Gimme will step in. John Reis, you guessed it, guitarist and lead vocals for Rocket from the Crypt or Jonny “2 Bags” Wickersham from Social Distortion will be filling in and on occasion, Jay Bentley from Bad Religion or maybe CJ Ramone from a little band you may have heard of, The Ramones, will sub for Fat Mike. Most recently we saw the UK import, Pinch from The Damned, on the skins. You never know what star-studded lineup you will get at a Gimmes show, but you know it will not disappoint.

So, what is really left to say about punk super-group and cover band extraordinaire Me First and the Gimme Gimmes? After 7 studio albums, a live record and too many singles to count, they’ve tackled just about every genre under the sun. Be it Motown, Country, show tunes, Japanese Pop (sung in Japanese!), these seasoned punk rock pros have triumphed on every occasion in a way only the Gimmes could. With such an extensive and wide ranging catalog, where does one begin?... With a live show of course! The powerhouse continues and they’ll be singing ballads, showtunes, Country and Motown tunes

Born from the DIY/all-ages scene in New York, THICK make music with the raw defiance of punk and addictive melodies of pop, punchy and catchy and wildly tongue-in-cheek. With their live show typically spawning a mosh pit described by Stereogum as “more like an aggressive hug,” the Brooklyn-based trio bring an unchecked intimacy to every song while building a deep and unshakable solidarity with the audience.

On their debut album 5 Years Behind, THICK confronts the countless disappointments and injustices they deal with every day: the reckless hypocrisy of people in power, social media’s erosion of genuine connection, dudes who feel inexplicably entitled to share their most loathsome opinions. But even in their most exasperated moments, THICK sustains ferocious energy and untamed joy, ultimately turning every song into a wildly cathartic anthem.

You may also like the following events from Westville Music Bowl:

Tickets for Flogging Molly & Violent Femmes can be booked here.