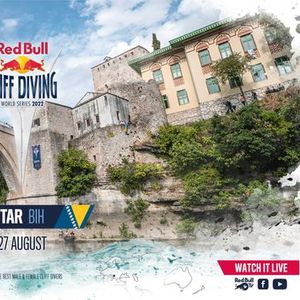 It’s no wonder that Mostar’s famous old bridge has served up so much recent drama. For three years in a row between 2017-2019, Stari Most played host to the penultimate stop of the season, a crucial point at which pressure can make or break an athlete’s season and in 2021 it was a dive directly from the bridge and pouring rain which added extra spice to the spectacle.

In 2019, Gary Hunt and Rhiannan Iffland secured their titles here, while Constantin Popovici scored five 10s for a perfect dive. In 2018, Steven LoBue allowed the British record winner Hunt back into a thrilling title fight after missing the podium. And in 2017, Iffland almost lost her crown after a poor warm up entry left her injured and out of the competition.

The World Series’ 7th visit to this UNESCO World Heritage Site marks the start of the second half of the season and the cliff diving elite will be welcomed by a new platform design inspired by the local building tradition.

Built in the 16th century, the iconic bridge gracefully arches over the emerald water of Neretva River, connecting two parts of the old town in Mostar. On both sides surrounded by fortified towers, it fits seamlessly into the landscape, creating an impressive sight.

Diving off Stari Most dates back to the 17th century, when young men started to dive from the country’s most recognizable landmark in a sort of maturity test in a very traditional technique. Today, the fine art of cliff diving is equally respected and the athletes of the World Series are invited to warm up and prepare in rooms of the local diving club.

Eternalized in the city’s flag and coat of arms, life in Mostar has been centred on the humpback bridge ever since its construction. Equally iconic as the bridge, is the image of a diver soaring through the air from the bridge towards the fast and cold water of the Neretva River.

You may also like the following events from Red Bull Cliff Diving: