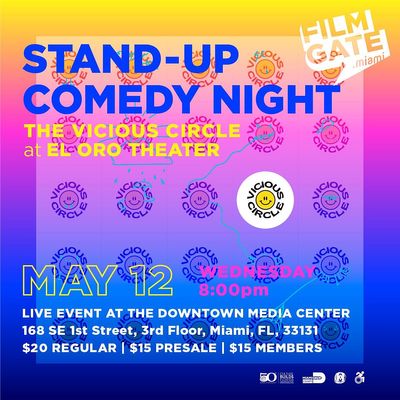 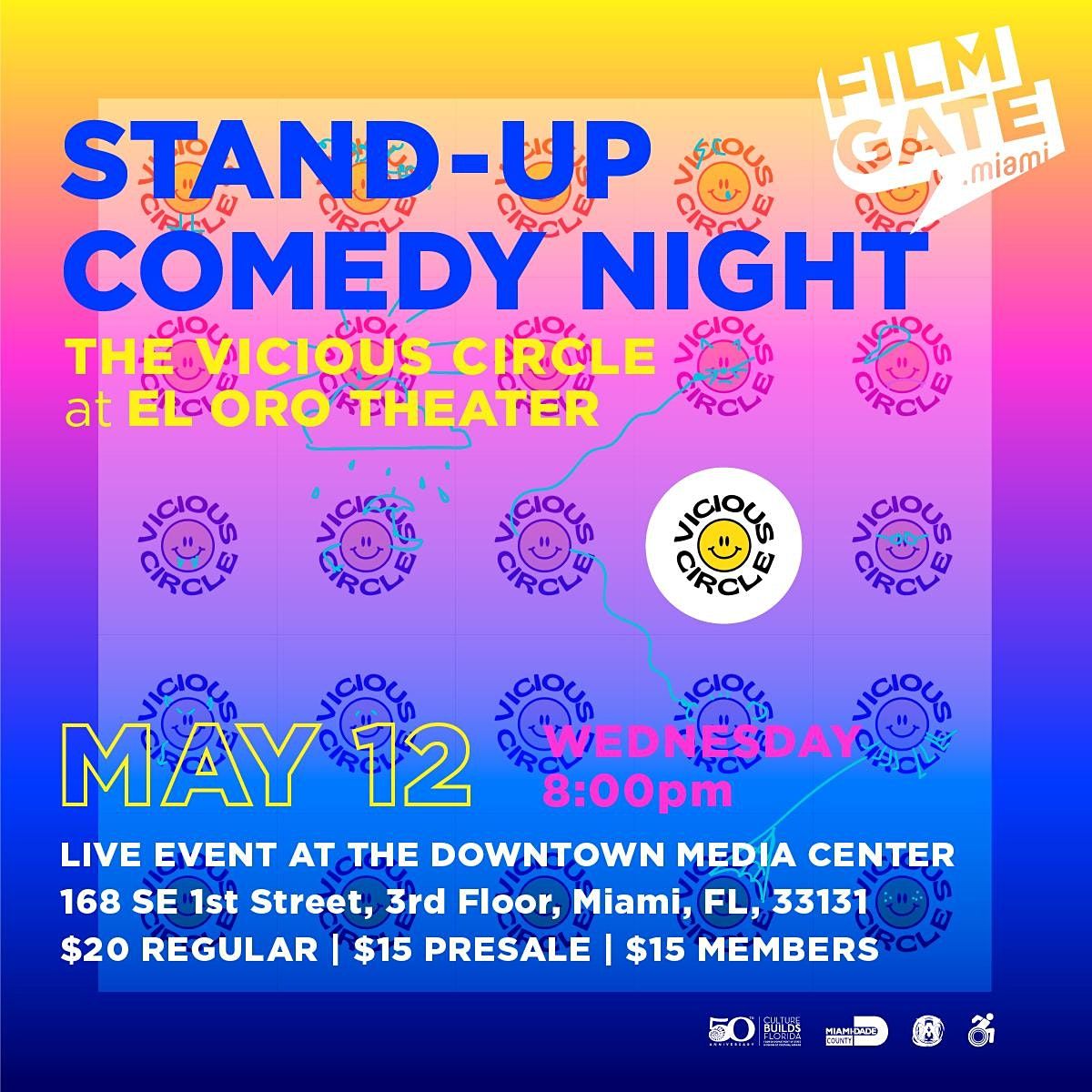 
Every major city hosts Stand Up comedy that represents the people, the city and the state. The Vicious Circle and FilmGate Miami welcomes comedy to Downtown Miami. Once a month The Vicious Circle will take stage to give you and you friends giggles and laughs.
EL ORO theater has always welcomed audiences to movies, experimental films and now audiences will enjoy the movie loving stand up comedy team - THE VICIOUS CIRCLE

EACH TICKET INLCUDES 1 TREAT or 1 BEVERAGE

Take the side parking garage stairs down

Ticket validation will be conducted at the studio FRONT DESK :

Vicious Circle- we make stuff to make you laugh.

We are a comedy collective based out of Miami, crafting sketches, content and jokes that at the very least will make you do that thing where you kind of snort breathe in satisfaction and at the most will have you trying not to pee a little bit in your pants. Stay up to date here on what we are up to, attend one of our events, or at least comment on what level of chuckle you are at!

Riley Edwards is a comic/writer who performs stand up all over South Florida and occasionally alongside the Gold Coast comedy tour. His published writings include: This bio, and some tweets.

Daniel Bergamini is a stand-up comedian from Miami, Fl.

After entering the matrix and experiencing childhood in São Paulo, Brazil, Daniel moved back to Miami at the age of 7. He is best known for involving the crowd with his off the cuff style and witty punchlines. You can find him performing all over south Florida bars, clubs, lounges and earlier this year opening for Russell Peters.

Chris Renois is a 23 year old Standup Comedian/Content Creator out of Orlando, Florida. Performing on stage since the age of 14, Chris also showcases his comedic talents on the internet making skits on TikTok, where he has amassed over 100k followers. His skits have been featured on T.V programs such as Right This Minute and Access Hollywood.

Oriel Rodriguez has established himself in the Miami stand-up scene with a polished conversational style that hits on family, dating, city life, and bad habits.

He regularly produces and hosts two of Miami's longest running stand-up shows: Redbar Brickell Monday nights and Taurus in the Grove on Thursdays.

Lonnie has been doing standup comedy for the lifespan of a hamster. He's been trying and failing to tell jokes that get bigger laughs than his hairline. His friends say they're proud of him but they cancel plans with him because they feel too full from lunch and they're sleepy now.

You may also like the following events from FilmGate Miami: