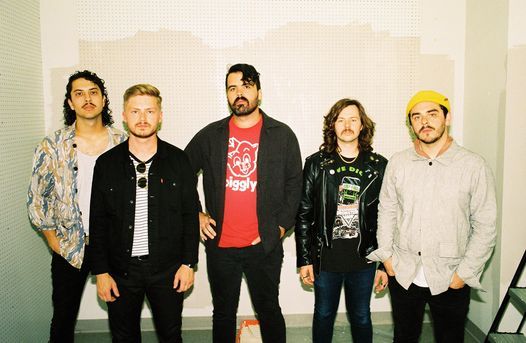 Carver Commodore is an alternative rock band from the modest town of Florence, Alabama. The band is composed of guitarist and vocalist Payton Pruitt, guitarist Phillip Blevins, drummer Noah Freeman, multi-instrumentalist Clayton Christopher, and bassist David Smith. In contrast to the “swampy, soulful sound” that put their hometown on the map, Carver is known for fusing garage, indie, and pop influences into stadium-worthy rock anthems. Modern alt-giants like Cage the Elephant, Jack White, and The Strokes tend to inform Carver’s guitar-laden hooks, recording aesthetics, and signature sticky songcraft.

Whitehall is an indie rock four-piece from Charleston, SC. They merge a dancey demeanor with aninsatiable desire for more out of life, making for an incredibly energetic and heart opening liveexperience. When they aren’t shotgunning La Croix, Whitehall tours the east coast.

You may also like the following events from Carver Commodore:

Tickets for Carver Commodore & Whitehall at Growlers - Memphis, TN can be booked here.