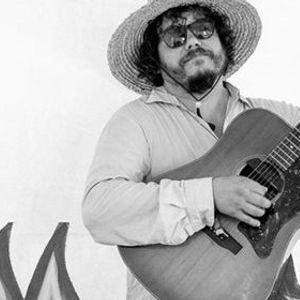 Bobby Bare, Jr. could’ve phoned in a career. He could’ve exploited the fact that he’s the son of iconic Country Music Hall of Famer Bobby Bare, was born into Nashville’s Music Row elite, and counted artists like Shel Silverstein as close family friends and George Jones and Tammy Wynette as next door neighbors. Instead, Bobby blazed a path of unique songwriting craftsmanship with a voice that blows through you like an unyielding wind on the desolate prairie.

With a big-as-the-room persona, an ability to rock the doors off the most jaded of clubs, the heart to hold a room completely still with just his guitar, and a genius for arrangement, Bobby Bare, Jr. and his band of merry makers are one of the most unique bunches around. They are adept at abandoning common sense in favor of laying themselves at the feet of a rambunctious, freewheeling, and unfettered and unhinged muse.

In the late 90's, he fronted the boss hog rock band, Bare Jr. With their two records, Boo-tay and Brainwasher, they memorably rocked out on a Nirvana-on-Skynryd-not-Sabbath groove, more indebted to the homebrew than "The Other H." He keeps himself even busier by appearing on albums by indie rock heroes like the Silver Jews and Frank Black and My Morning Jacket. Few that we have found can combine humor, pain, and anger in such an effortlessly well-crafted manner. If encountered in public, beware: Bobby is a big, gregarious, good-natured fellow who will giddily talk music (from the Smiths to Roger Miller to Metallica to Dolly Parton--sometimes in one breath) until the bartender is tossing you both out.

Look, we LOVE Bobby's records and we want people to hear them. Maybe our descriptions are making you scratch your head or are scaring you off. Forgive us, his music is ahead of its time and we are not sure what to say about it. All the years we all wasted getting English degrees are powerless in coming up with suitable words to describe his projects. When someone around the office is absent-mindedly whistling a tune, chances are real good that it's, "I'll Be Around" or "Valentine" or "Borrow Your Cape." Bobby's music is ample proof that commercial radio wouldn't know a genre-bending smash hit if it ran up and bit it in the ass, and, if radio programmers weren't all neutered corporate lapdogs, his songs would be in the broad canon of rock.

You may also like the following events from The World Famous Hernando's Hide-A-Way: