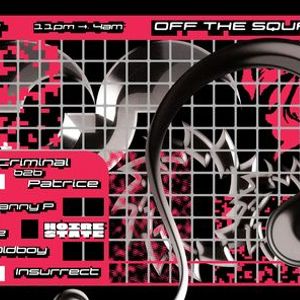 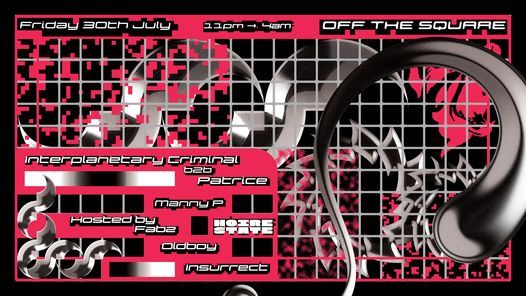 Somebody call BoJo, cos we’re planning a Pr*son break; lead by none other than Swamp-81 star Patrice going B2B with a *very* Special Guest, supported by local legends, Manny P and Insurrect. Bringing all the UKG, Breakbeat, Dubstep and Grime heaters, that don’t deserve to be locked up any longer.

General sale, Friday 5th March, 9am. Right of entry to comply with government legislation at the time of the event.

After our socially distanced event last July, we promised every single one of you who attended that we’d all get the chance to properly party together again - for that reason, we’re offering every single attendee from last time a guest list place for this show. Please email (ZW5xdWlyaWVzIHwgbm9pcmVzdGF0ZSAhIGNvbQ==) or DM us with your name (must be the original ticket holder) and the names of any plus one’s or two’s, if more than one ticket to the previous event was purchased. All guest list spots unclaimed after this date will be placed back on general sale.

We can’t bloody wait to party with y’all again.

Patrice
Headlining the night, alongside our Special Guest, is Swamp81-dweller and Rinse resident, multi talented DJ, Producer and local lad, Patrice. With multiple Rinse shows under his belt alongside Swamp81/Loefah/Sumgii, a recent YouTube FOLD x Swamp81 special b2b with Big Kani ft. Snowy, as well as a standout B2B with Interplanetary Criminal for Limbo Radio, the CV on this guy is endless. As a producer, Patrice linked with Pete Cannon on Butterfly feat. Snowy, back in October 2019, and more recently worked on big-beat duty for ‘Vanish’ alongside Faultz, and on D.I.T.B with Big Kani, released in June and early December respectively. Just to top it all off, Patrice runs Emib clothing, hot off a recent collab with Swamp81. Patrice was kind enough to record a selection of hip hop / trap royalty for us to sign off our mix series last year, which you can check out here - https://soundcloud.com/noire-state/nsmix-009-patrice-231220.

Manny P
Though elusive to the social media sphere, Manny P has been spinning garage and bassline bangers for the better part of the last decade. As one half of Bookey Beats, Manny P played alongside the likes of Tempa T, DJ Cameo, TQD, Devilman, Champion, Burgaboy, T2, Mr V, Hi5Ghost, X5 Dubz, DJ EJ and many more. Expect a myriad of fast cuts and spin-backs for his energy filled set.

Insurrect
Cutting his teeth in the Hull party circuit as a Crystal Clear resident, Insurrect has a penchant for the darker, sub-centred avenues of electronic music - fluctuating through Breaks, Dubstep, Electro and UKG. Having supported the likes of Conducta, Madam X, Sir Hiss and Smokey Bubblin’ B, and hosted nights in Hull, Manchester and Shrewsbury, as well as monthly residencies on Subtle Radio & Alto Radio, Insurrect will be bringing the hype to the opening hours of the night.