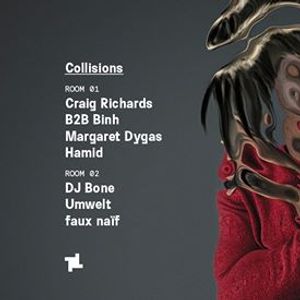 Craig Richards is joined by two of the minimal scene’s leading figures, Margaret Dygas and Binh. Margaret Dygas has a sound that’s solely her own. Through her deep, dubby productions for Perlon, she’s honed a singular, abstract take on minimal – a style that’s long been associated with her Berlin hometown. Whenever she plays in the German capital she’s most frequently found spinning at Panorama Bar or Club der Visionaere, where her sets can take in anything from classy minimal house to trippy, hypnotic techno. She’s also been close to us for most of our history, and outside of Farringdon, she’s widely considered one of house and techno’s finest selectors. Also flying in from Berlin is Binh, the mysterious DJ and producer with a strange sound that crosses high-octane techno and paranoid electro. His label Time Passages is home to a number of weird club cuts from him and his closest contemporaries, while he’s also released on imprints like Cabaret, My Own Jupiter and Perlon – the cream of European minimal. He champions the same sound as a DJ, often favouring forgotten 90s cuts, with extra-terrestrial techno and electro at the core. This February, our founding resident invites him for a back-to-back set merging their mind-bending record collections. Both artists also complement one another in their considered approach to DJing, something they’ve shown in their previous link-ups in our space. Fresh off the back of his recent return to London after an extended stint living in Berlin, local favourite Hamid completes the proceedings.

DJ Bone plays Room Two. The Subject Detroit founder is a cornerstone of the Motor City. Through his long-running imprint, he’s flown the flag for a powerful, soul-minded style of Detroit techno, mostly via his own productions. He’s also one of the most technically gifted DJs on the circuit, famous for chopping between his high-energy cuts with baffling precision. His annual sets at the highly-revered Freerotation festival are rightly regarded as an event in their own right, and we’re equally excited to welcome him back to EC1 for the first time since 2014. He’s joined by Umwelt, the French artist known for crafting raw electro with an experimentalist edge. Most of his work can be found on his labels Shelter, Fundata, New Flash and Rave or Die, and in between his duties for each imprint, he’s usually busy playing at some of Europe’s finest techno spots. We finally welcome back faux naïf. The London DJ quietly emerged on the capital scene by showcasing her love of gritty EBM and its affiliate styles, and with regular radio appearances, her MIIM party and sets at clubs like ours and Tresor, she’s built a dedicated following among fans of the same sound. She rounds off a night of electronic sound Collisions of the highest order.