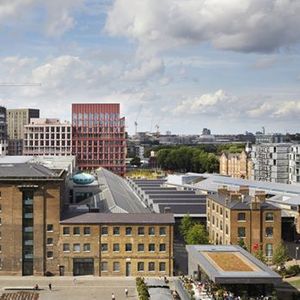 Join the Architecture Foundation’s expert guide Nick Edwards for a walking tour exploring King’s Cross. Discover the architectural visionaries behind the revolutionary new mixed-use district, which has transformed an enormous swathe of post-industrial central London. Located on a 27 hectare landscape of former railway sidings and warehouses – the £3 billion mega project has created a major new office, residential and educational zone anchored around a landmark Central St Martins campus with high-profile occupiers including Facebook, Google and the Aga Khan Development Network.

VENUE
We will meet at Battle Bridge Place, Kings Cross

Tickets for City Crit: King's Cross can be booked here. Get Tickets

You may also like the following events from The Architecture Foundation: